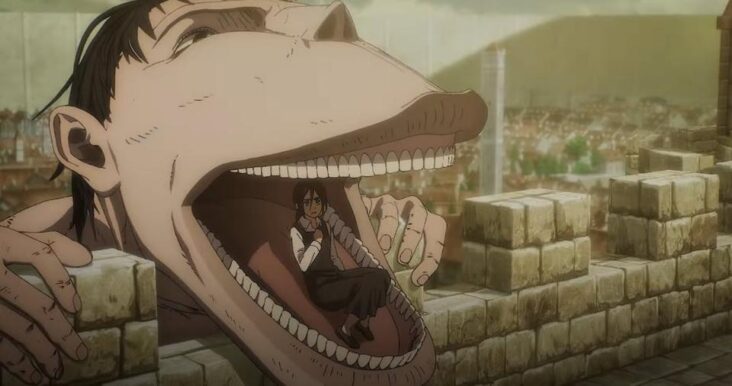 Before the premiere of Part 2 of The Final Season, I want to offer you an article in which I review all the Shingeki no Kyojin series, movies, OVAs and specials and in which I order them to facilitate your work of searching to see what each one is about and where they fit into the main story.

Where do I start to see Attack On Titan?

Important note ❗ : Before starting to review the different Shingeki no Kyojin products, I want to make it clear that I  always recommend seeing and reading everything in the order of publication, but in favor of a better structure of the article and reading comprehension, here I have chosen to order them chronologically .  And now yes… Let’s go with the guide!

Shingeki no Kyojin / Attack On Titan--Season 1

We start with the logical, the first season of the Shingeki no Kyojin anime. In these 25 episodes the first 8 volumes of the original manga are adapted . It is also important to note that there is a chapter 13.5, called Ano Hi Kara , in which the events of the first 13 episodes of the series are recapitulated.

Of these three OVAs , only the first one, «Ilse’s Diary», is considered canon, since its story comes from a parallel story written by Isayama-sensei for volume 5 of the Shingeki no Kyojin manga. The other two are anime original stories, so they can be skipped.

This canon OVA tells us about Levi Ackerman’s past, from his first missions outside the walls to his beginnings in the Reconnaissance Squad.

Second part of Levi’s canon OVA , in which Hange and Erwin are also key figures.

The second official season of the anime. Numerous secrets about the Titans and Eren’s own companions are revealed here, and the protagonists’ first forays with the Survey Corps are recounted.

The first part of the third season of Shingeki no Kyojin is responsible for adapting volumes 13, 14, 15, 16 and 17 of the original manga. Beyond the terror of the Titans, these episodes introduce the threat posed by humans themselves.

In this second part of season 3 of Shingeki no Kyojin volumes 19, 20, 21 and 22 of the original manga are adapted. Here one of the bloodiest battles of the series is narrated, a fight to discover the truth that is hidden in the basement of Eren’s home.

For the final stretch of the series , the animation studio was changed, going from WIT Studio to MAPPA . This time we are told the story of the two great sides of Shingeki no Kyojin.https://areajugones.sport.es/ads.txt?unblockia=true

The second part of the final season of Shingeki no Kyojin , as its name indicates, is responsible for closing the story created by Hajime Isayama.

This is a compilation film that is responsible for telling, in a summary way, everything that happens in the first 59 episodes of the original anime. This is a summary of the first three seasons.

This movie summarizes everything that happened in the first 13 episodes of the anime . It is complemented by the tape that I will talk about next.

This feature film summarizes everything that happens from episode 14 to 25 of the original Shingeki no Kyojin anime.

We are dealing with several specials in flash format and with chibi-style characters that were included as an extra on the DVDs and Blu-Ray of the first season of Shingeki no Kyojin.

A new selection of short stories featuring chibi-style characters, which were included as a bonus on the Shingeki no Kyojin Season 3 DVD and Blu-Ray.

Attack On Titan: The Movie

The first live-action of Shingeki no Kyojin. That’s it, that’s all you need to know.https://areajugones.sport.es/ads.txt?unblockia=true

The second part of the feature film mentioned just above, another nonsense.

This cute chibi-style series features the characters from the original series, but the setting and story are completely different. Discover the adventures of Eren and company in a Japanese institute.

This non-canonical spin-off focuses on telling us the story of Jean Kirstein , a partner of Eren and the others who became obsessed with Mikasa, who dreamed of joining the Military Police and who treated his mother like a wretch.

This non-canonical OVA presents us with a most complicated mission for Eren’s group, in which they must learn never to trust each other while they are outside the walls.

This series made up of three OVAs introduces us to the story of Annie Leonhart , and is based on a novel written by Hiroshi Seko, which in turn is based on the Shingeki no Kyojin manga. So even though it fits nicely into the structure of the main series, it shouldn’t be considered canon .

One day it had to come. The wild success of Shingeki no Kyojin caught the attention of Hollywood , and thus a big-budget live-action movie based on the Isayama-sensei phenomenon is already in the works. This film is produced by Warner Bros, and at the time there was talk of a premiere in 2022, but absolutely nothing has been heard about the project.

Attack On Titan ; The age and height of the main characters.