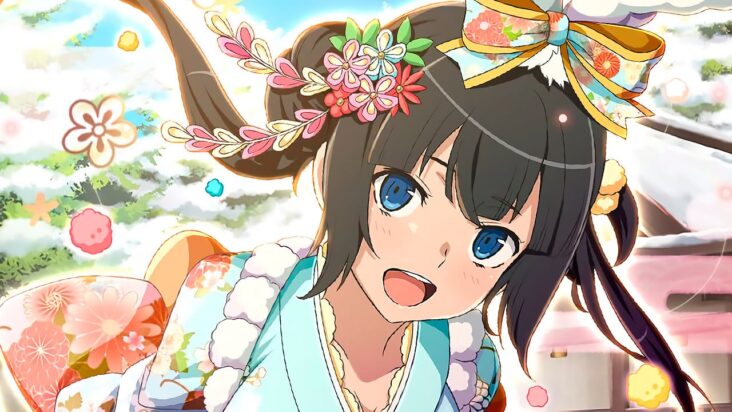 With the arrival of a new year in Japan, well-known authors, mangakas, and illustrators in the light novel and manga industry are celebrating the beginning of a new year and the author of the light novel together with their followers.DanMachi» (Dungeon ni Deai wo Motomeru no wa Machigatteiru Darou) I also participate in this theme by sharing a beautiful illustration of the goddess Hestia.

In the illustration of Hestia special that Fujino Omori (author of DanMachi) shared in his twitter accountyou can see how the goddess wears a charming and attractive Kimono with floral prints that combines perfectly with this beautiful waifu.

Additionally, Fujino Omori expressed that he feels more than happy that the tenth anniversary of DanMachi is fulfilled in the «Year of the Rabbit» and thanked those people who continue to support the franchise in all these years.

the light novel DanMachialso know as «Dungeon ni Deai wo Motomeru no wa Machigatteiru Darou ka (Is It Wrong to Try to Pick Up Girls in a Dungeon?)», is written by Fujino Omori and illustrated by Suzuhito Yasudaand began its publication in the editorial seal G.A. Bunko from the publisher SB Creative since January 2013. The light novel is still in publication, and has 17 published volumes in total.

The work has a manga adaptation that is in charge of Kuniedaand began its publication in the magazine young gangan from the publisher Square Enix since August 2013.

On April 4, 2015, the light novel DanMachi It would premiere its anime adaptation that consisted of 3 seasons (37 episodes in total) 1 movie, 3 OVAs and a fourth season that will have 2 parts in total. In addition, the animation studio JC Staff was in charge of producing the series under the direction of Yoshiki Yamakawa (first season) and Hideki Tachibana (Following seasons).

Let’s remember that the second part for the fourth season of DanMachititled Dungeon ni Deai wo Motomeru no wa Machigatteiru Darou ka IV: Fuka Shou Yakusai-hen», is scheduled to premiere in Japan on January 5, 2023 and will be broadcast on the platform HIDIVE.

Life in the bustling city of Orario is never dull, especially for Bell Cranel, a naive young man who hopes to become the greatest adventurer in the land. After a chance encounter with the lonely goddess, Hestia, his dreams come a little closer to reality. With her encouragement, Bell embarks on a fantastical quest as he delves into the city’s monster-filled catacombs, known only as the «Dungeon.» Death lurks in every corner of the cavernous depths of this terrifying labyrinth, and a mysterious power lurks in the shadows.

Even on the surface, survival is a hard-earned privilege. Indeed, nothing is certain in a world where gods and humans live and work together, especially when they often struggle to get along. One thing is for sure, though: a myriad of mistakes, triumphs, and friendships await the fearlessly optimistic protagonist of this Herculean tale.