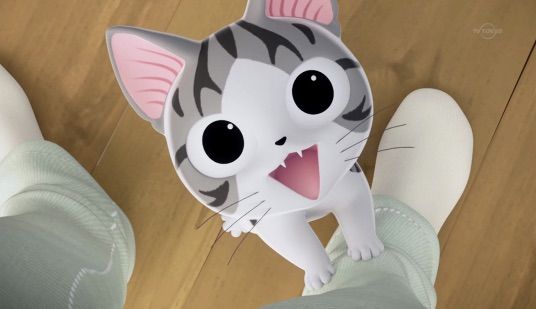 The four best animes to watch with your cat:

She and Her cat: A short and touching anime

She and Her cat  is an anime of only 4 short episodes that tells the relationship between a girl and her old cat from the first day she adopts him. The way she relates to him, how they get to know each other and how they have to take care of each other. The entire anime is narrated from the cat’s perspective.

This anime by Makoto Shinkai is one of my favorites in his catalog of works made. He knows how to tell a personal story in as little as twenty minutes of scenes.

This is one of his most personal and different works. In just 5 minutes you can evoke an atmosphere of tranquility, sadness, melancholy, excitement and hope. If you have cats or want to adopt one, watch this anime.

Chii’s Sweet Adventure is an anime that narrates the life of the kitten Chii who is taken in by the Yamada family after losing her mother. Each chapter is self-contained and with no more pretensions than to show us a pleasant story of a sweet kitten and her adoptive family.

A very nice process that they go through on stage is that of adaptation: At first, Chii is reluctant to live with the Yamada family and will find a way to find her mother. But, eventually, she learns to live with this family, with their customs and with their affection.

If you want to have a nice time, you can watch this series. Leave an episode in the middle and come back later. It is not a complicated anime nor does it seek to be nor does it need to be.

Bananya: An adorable anime without complications

Bananya is one of the most adorable anime you can see with the best plot of all: Bananas hide a secret. When no one is looking at them, cute kittens come out of their interior to walk and play around the house. That’s what the series is about and it’s perfect as it is.

Despite its incredible premise, it only consists of 13 3-minute episodes (2 if we don’t count the ending). Each one of them has small capsules where we see how the bananya interact, have fun and play with the world around them.

His anecdotes and adventures range from learning to open a fridge to how to watch television. If you are having a bad day, you need to watch this anime.

My roomate is a cat:

My roomate is a cat is an anime that tells us about the relationship between Subaru Mikazuki, a novelist who has a hard time relating to other people, and a small abandoned cat that he finds on the street. We know both sides of the coin in this anime: Half of the episode is told from the human’s perspective and the other half from the cat’s.

Thus, we will see how they will forge a friendship and end up living together. If you have ever wanted to adopt a cat, this anime will make you smile yes or yes. Minatsuki’s manga adaptation knows how to approach small scenes to move us. How to receive your first meal can mean the path that your friendship will take until the misunderstandings that may arise due to the lack of experience of both.