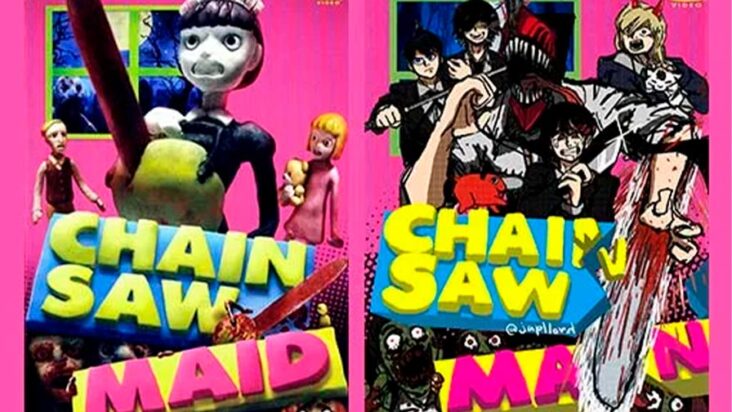 Chainsaw Maid is an animation made with extremely bloody clay dolls, the video was published on December 9, 2007 and I must say that I saw it recently, I found out about the video because of a Tweet that made the Chainsaw Man x Chainsaw Maid crossover, the crossover they have done it mainly because of the resemblance of the protagonist, a servant who ends up using a chainsaw to survive and get rid of the walking dead.

The gore animation is a gem since it currently has almost 8 million views and on top of that it is incredibly good, so much so that they released the DVD for sale, which includes the original video and an episode entitled «Chainsaw MaidZero”. For some reason I feel that Tatsuki Fujimoto knows that video and maybe he was inspired a bit for Kobeni Higashiyama from Chainsaw Man, that information is not yet official but I like to assume that it was.

The Chainsaw Maid x Chainsaw Man fanarts are very few but extremely good, you will have in this article all the ones I could find, of course I will also leave the video I am talking about, I hope you enjoy it. After watching it you might wonder if Tatsuki Fujimoto had any inspiration for the character of Kobeni Higashiyama.

Certain maid with the chainsaw pic.twitter.com/mIevNM4rWT

Now that I think about it I should make sure I get that DVD and keep it at home, it’s so Chainsaw Man that I would get it just for that, I guess it will be difficult to get it for all the years that have passed and surely the available parts will be found in an old drawer of relics, I’ll try anyway.

I keep thinking that it’s a lot of coincidence, I know that Kobeni is not as aggressive as the protagonist of Chainsaw Maid, but seeing that animation I can’t see it without thinking of Chainsaw Man, I also know it’s because of the chainsaw. Do you really think that Tatsuki Fujimoto was inspired in some way by Chainsaw Maid? Remember that Fujimoto has like 300 references in Chainsaw Man, by the way, if you want to know more great Chainsaw Man content you have to visit my other website called All About Chainsaw Man, I will try to say it in each article, it should not go unnoticed.

I found several fanarts of «Kobeni maid» seeing Kobeni dressed like that definitely makes me sure that Fujimoto thought of that, I’ll make a bet, if somehow at some point we get to see Kobeni dressed like in those fanarts, everything will be confirmed and Tatsuki Fujimoto if he would have seen Chainsaw Maid, for now it is only my guess and it is only a matter of time to verify it.

I make that bet with myself because Tatsuki Fujimoto likes to show his references and inspiration, it’s very characteristic of him, so Fujimoto would if he was an inspiration, don’t give me too much importance, I go crazy writing these things.