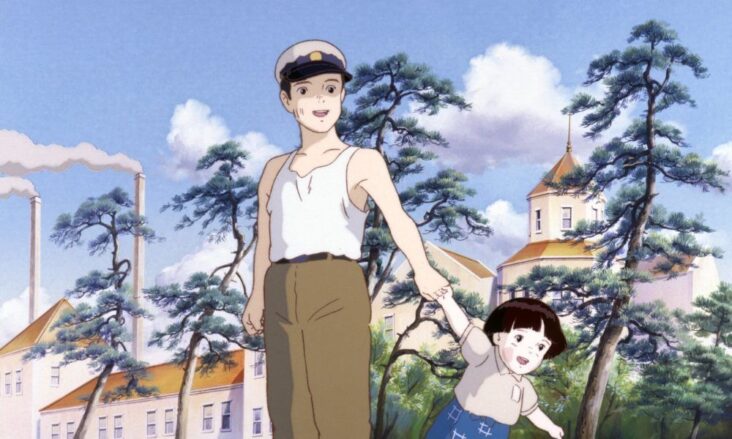 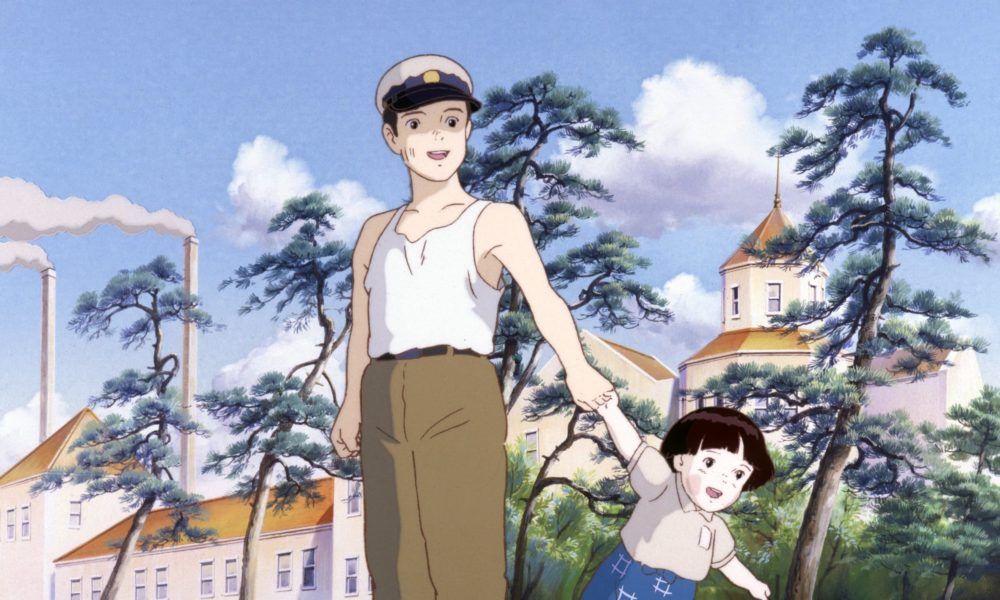 Where do children’s dreams go? What happens to your innocence when it is lost? Or rather, when they are stolen. When a world of adults who only think of themselves forces them to be what they are not with blows. In a world of selfishness, of battles more lost than won and a feeling of pathos that makes it almost impossible to breathe, two brothers try to survive. An older brother who stopped being a child when he had just begun to be one who protects his sister tooth and nail from what destroyed him. Because he refuses to bury, again, his dreams and innocence in the same place where fireflies are buried.

The fireflies’s graveof Isao Takahata,, lasts 88 minutes and marks an entire life. She returns to Spain hand in hand with select vision the best anti-war animated film ever made. And today, we talk about her between tears and tenderness. A film that combines the worst of reality and the tenderness of the Studio Ghibli.

“Seita and Setsuko They are the sons of a Japanese navy officer who live in Kobe. One day, during a bombardment, they fail to reach the bunker on time where their mother is waiting for them. When they later look for her mother, they find her badly injured in the school, which has been turned into an emergency hospital. This is the plot with which the film is presented most “nationalistfrom the animation studio Hayao Miyazaki.

Is he summer of 1945, the war is giving its last blows, some that not because they are final are going to be less deadly. In a sky where the bombers have conquered the birds and a land sown between fear and uncertainty, two little ones try to survive. Her mother can barely fulfill her functions as a human, let’s not talk about what she should have as a parent. Although, if a yardstick were used, it really only a minority of the population was really capable of being a person. 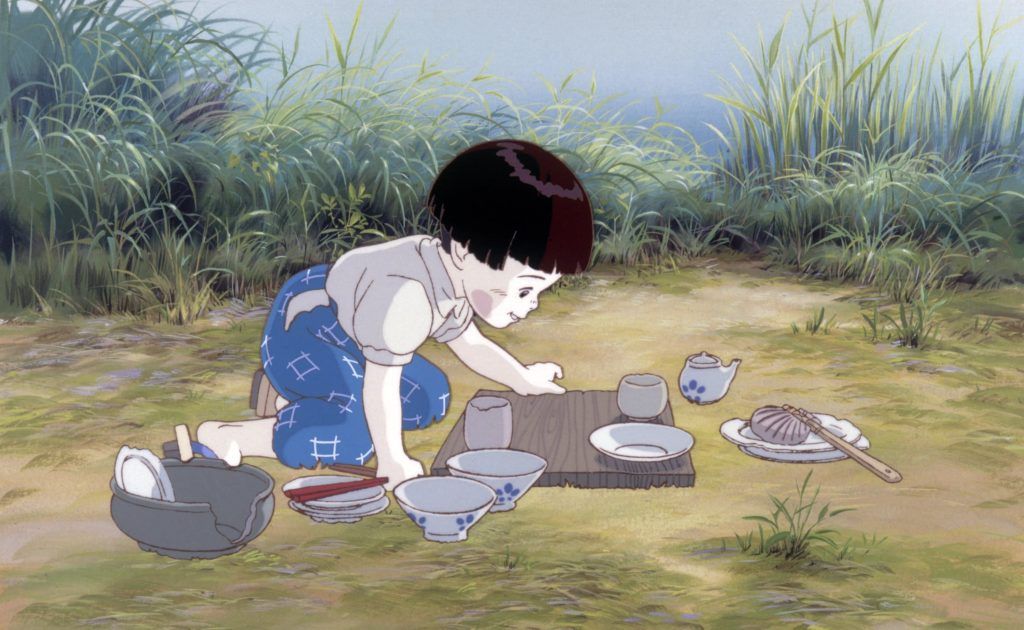 When bread is scarce, the news is less and less encouraging and defeat is the best option, the evil of the human being comes to light. At no time will that united and homogeneous Japanese society that we are used to seeing today be shown. No, what Takahata shows in his film is the human egoism of adults. From adults, and it is important to emphasize this point. Because children will never be guilty of the barbarity that the older ones are willing to commit. Between the tragedies, the small flash of fireflies shines in perpetual darkness. The small animal that gives the film its name is the perfect metaphor for the plot. Tiny insects, but capable of marking a path when nothing can be seen in the surroundings.

The innocence of children, the one that manages to see a whole treasure in a box of sweets, in a basin the noble helmet of a soldier, is lost in the smoke of the shrapnel. And the film asks a rhetorical question, where is the grave of the fireflies?

Talking about the feature film is talking about recent history, not only of Japan, but of the entire world. The Second World War it was a turning point for the world. Never before had such a large scale massacre occurred. Proof of this are the scars that to this day still have not healed. But let’s talk about the importance in the film. Within the non-fiction that is seen in the film at all times, one can see how, instead of the war as such, it talks about the consequences. It is living in war, or rather surviving. In the 88 minutes that the film lasts, they will never be seen, explicitly, by any high command of the Japanese armies. Nevertheless, There are not a few times that they name those who fight on the front lines with the utmost pride. 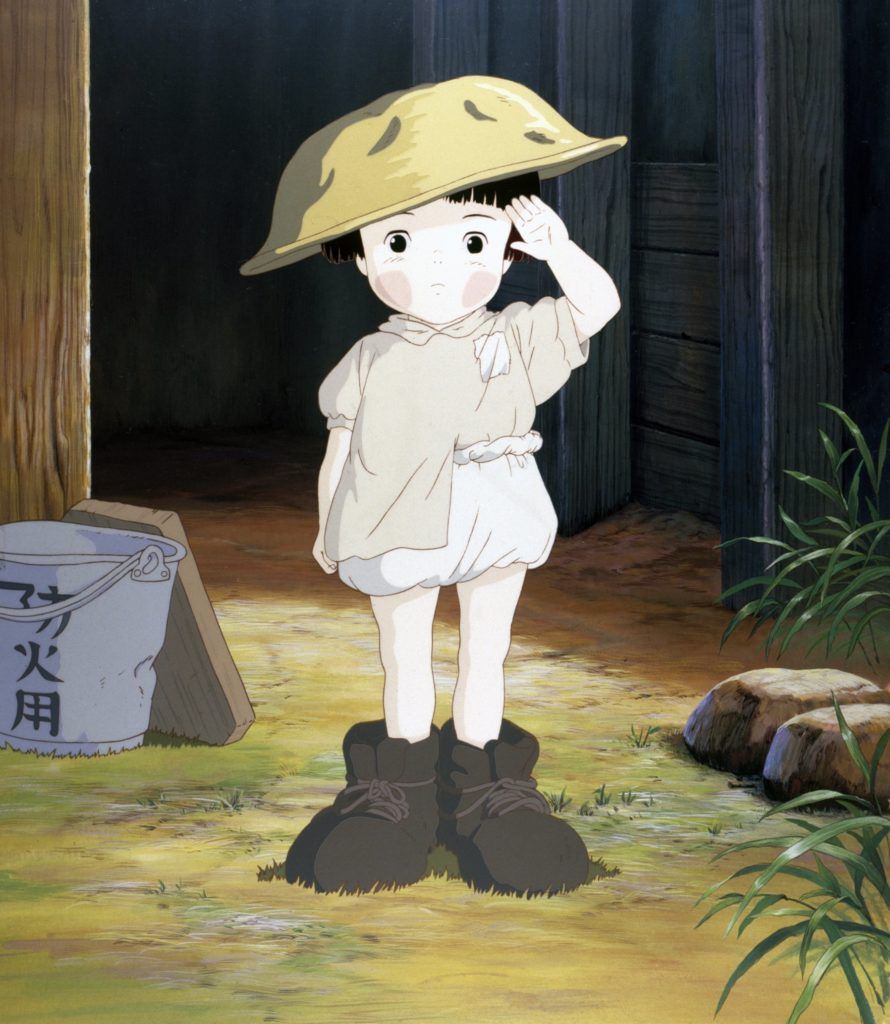 The narrative and the visual collide completely to show the contradiction of the war. While on the one hand the harsh living conditions and confusion are openly shown, Japanese pride is presented. At no time do they lose hope of winning, even though they are more than aware of the situation in their country. Adults and children starve while playing at being soldiers.

If a seal is the one for which the Studio Ghibli, that is the anti-war message. Before, I commented on the contradiction of opinion and the reality of society, and that is precisely the criticism of the film. The feeling of «We must strive to work and live for those who are fighting to defend the country», without even questioning the conditions in which they find themselves. Go down and accept reality even if it means death.

The film does not show the enemy against which the Japanese army is fighting because that is not the plot. It is about two children who are orphaned, who cannot stay at their aunt’s house, who has neither the resources nor the desire to take care of children that are not hers. It narrates how they must live alone, with nothing and no one to help them, eating what they find, taking refuge where they can find a roof, and still fighting to continue another day watching the sunrise. 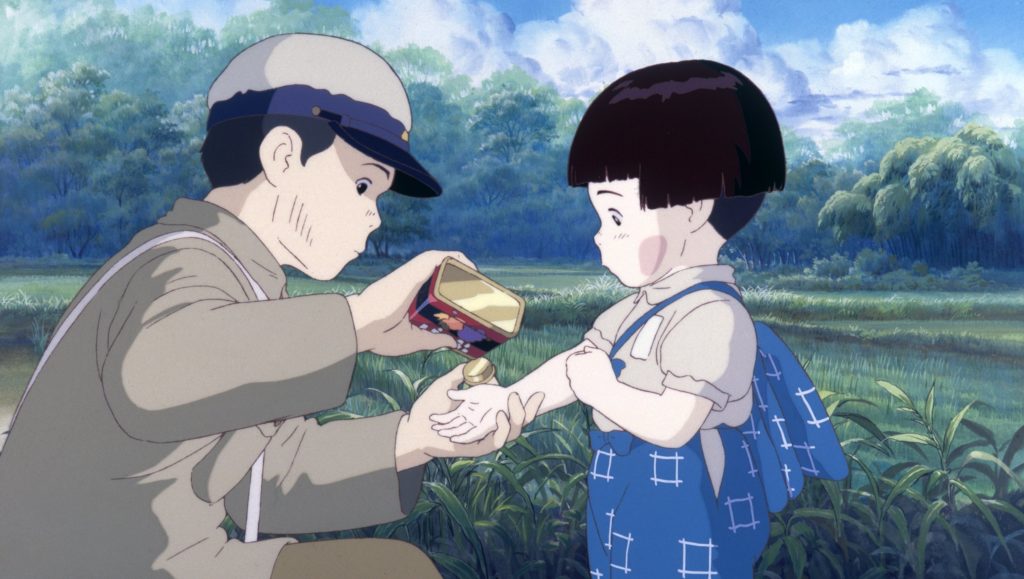 The end of this feature film, or the beginning, depends on how you look at it, it is heartbreaking, harsh, cruel, and worst of all, true. This is the darker side of a studio full of vegetation, love and lights. Although it is not the only film that deals with the war theme (porco rosso is an audiovisual delight that everyone should see at least once in their life) yes, it is the one that most appeals to Japanese sentiment.

Isao Takahata He was the director of this film, however, the narrative of the work is not his. Akiyuki Nosaka He wrote, in 1967, The Grave of the Fireflies. This story, along with american algae were published in a joint edition in Spain by the publisher Cliff. It should be noted that this book is currently out of print. Both works deal with the Second World War, the first the story of the two brothers in full conflict; the second focuses on the period after the surrender of Japan, it «Derision» from the attitude of the Japanese, going from combative to grateful with their own executioners. While one shows pride in the troops, the other shows the level of «pathos» to which society reached after losing. 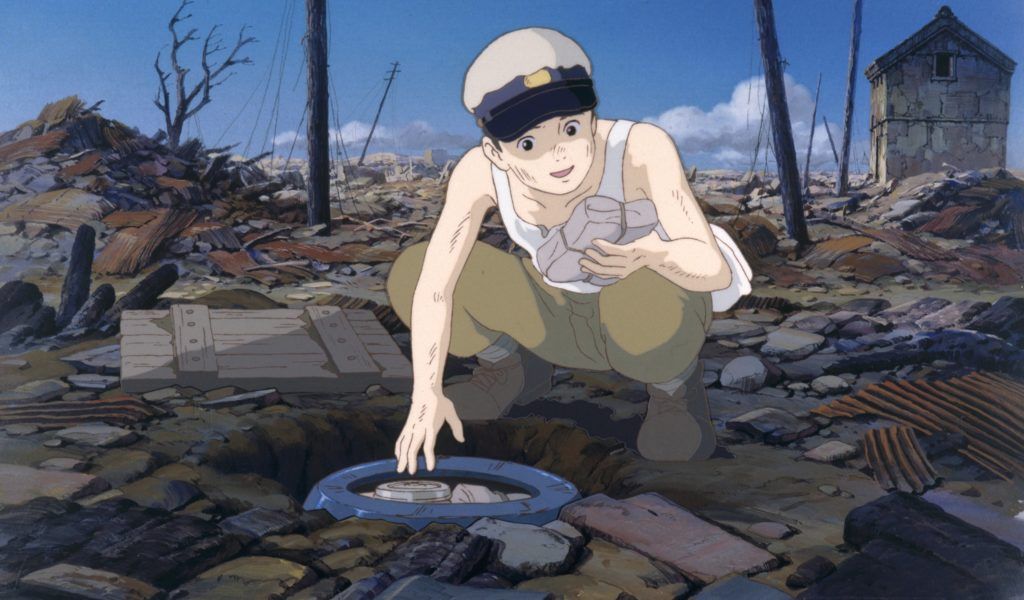 In fact, the author of both works flatly refused to take any of them to the movies. For him, making these types of adaptations was practically impossible. Or at least that was the case if it was a real image. When Takahata had the work in his hands, he did not hesitate to create an animated film based on the novel, and so it was. Some time later, with the film produced, the original author confessed that, had it not been animation, he would never have allowed his creation. For this one, the way in which they were presented, not only the characters, but also the locations was more than perfect.

On the producer’s part, his intention was not simply to create a film where the Japanese viewer would feel inferior, it was to demonstrate the nobility of those who lived through such situations. Takahata assured that his intention was to show how, even in bad times, the two children were just that, children, who sought to enjoy their days to the fullest. It is a film with a very strong message, but with the sweetness of childhood.

The fireflies’s graveor Hotaru no Haka in Japanese, arrives in Spain, again at the hands of select vision. Although today we will talk about the new edition, it is important to remember that it is by no means the first edition to arrive in our country. In its first instance, the film landed on the peninsula at the hands of Jonu Media in 2003 After the great reception in cinemas of Spirited Away. under the seal of jonu we were able to enjoy two versions, the first and the 20th anniversary. Both were full of extras, including interviews with the authors, documentaries and how the dubbing was made.. To this day, these contents are completely missing.

It was in 2012 when select vision bet on the film again, and it is now, in 2022 When it goes on sale the A4 edition. It should be noted that this review talks about the simple edition on DVD. Focusing on the collector’s edition, the extras included stand out, such as an unprecedented replica of the can of candy from Sakuma Drops or a booklets 48 pages with all kinds of information. 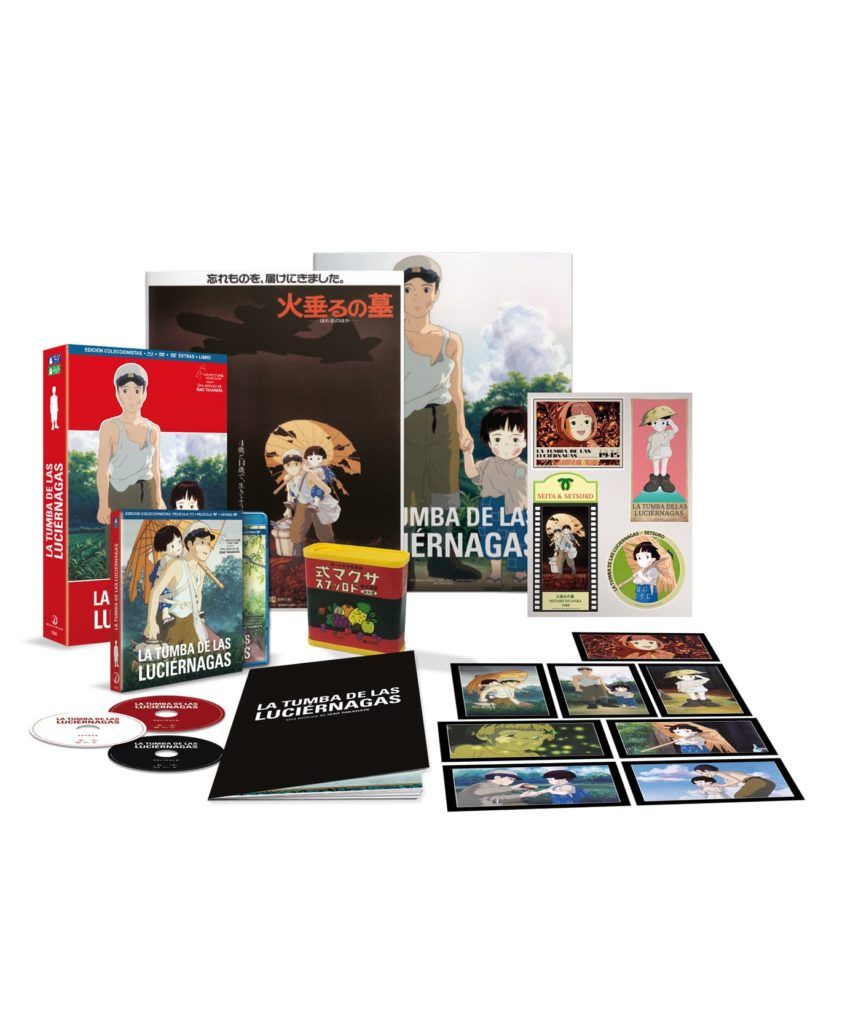 As for the crudest content of the film, it is an 88-minute film, in the classic 16:9 cinema format, and with dubbing into Spanish, Catalan and the original Japanese. Regarding the subtitles, they are only in Spanish. YoIt is important to mention the age recommendation of +12.

Heartbreaking. That’s it, I just have to say this about it. I really run out of words when it comes to talking about this audiovisual gem. I could talk about how wonderful the soundtrack is, the setting and the play of light and shadow, He could even analyze certain scenes in detail. Yes, it could have done all of that, and perhaps it would have been a much more comprehensive review. But it seemed to me that this was seeing the film with too cold a prism, too technical. 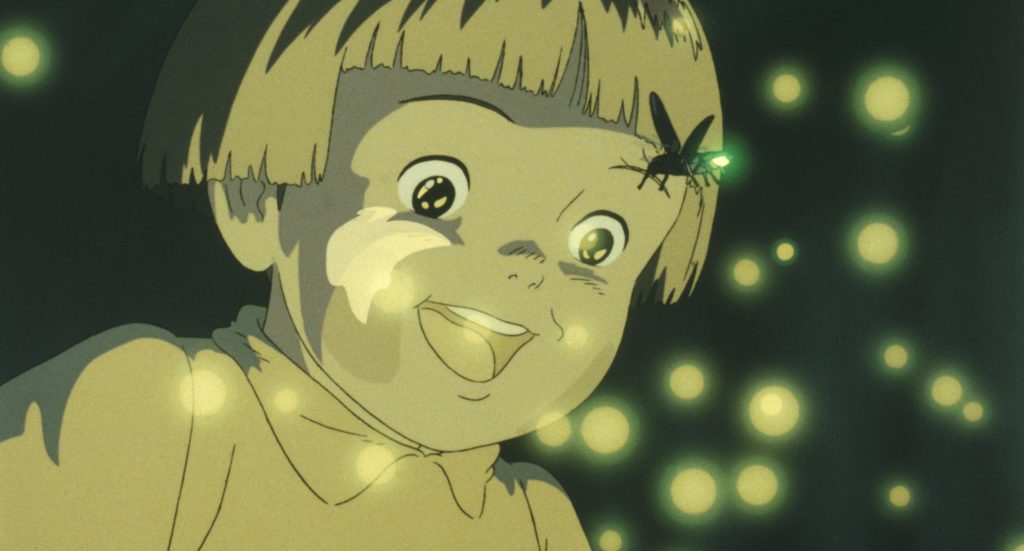 This film is enjoyed with feelings, with the rage that war produces, the tenderness of the innocence of children and the pain of a situation on the edge. More than enjoying this movie tears you apart. Yes, it is true that he seeks to show the most tender side, but the environments are not adequate. At the end of the day, it seeks to dignify people, not soldiers who, more than humans, become tools of war.

The fireflies’s grave he deserves everything good that is said to him. It is, without a doubt, one of the best war movies ever created by Japanese animation, if not the most. See it, mourn it, enjoy it. And above all, make love (not sexual, let me be sentimental at least once) and not war.