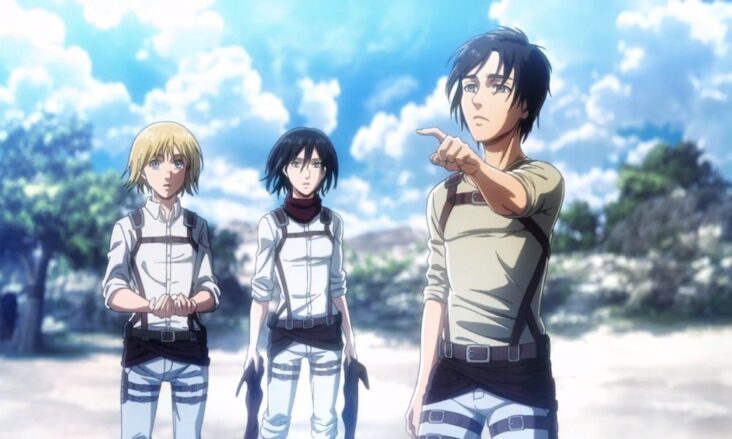 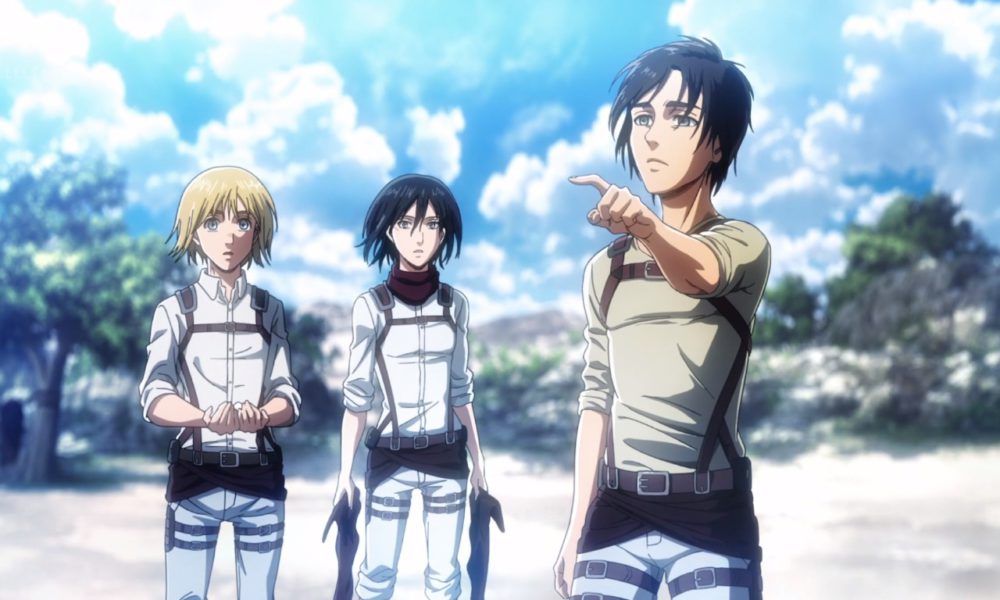 Since the first season, released back in 2013, Attack the titans It has come a long way since the fall of Wall Maria. Who would have thought that this popular anime would take the world of animation by storm, thanks to a gripping and adrenaline-filled storyWith action and excellent storytelling.

The second season had the difficult task of trying to build on this strong foundation. It added more information and background to the Titan threat, while also producing spectacular, game-changing revelations up to that point. With the third season, if we thought that nothing could surprise us, we were very wrong. Attack the titans was reinvented through a script twist that changed the perception of the universe in which the story takes place.

Thanks to select vision we were able to enjoy its simulcast and, later, its physical edition. After launching this third season in two packs, the distributor decided to give the edition a little twist to offer fans the 24 episodes that make it up in a single pack. Through this review, we bring you closer to this edition and to a excellent season at all levelswhich lays the groundwork for the end of Attack the titans. In it, it is adapted from chapter 51 to 90 of the manga, that is, it covers from volume 13 to half of 22. 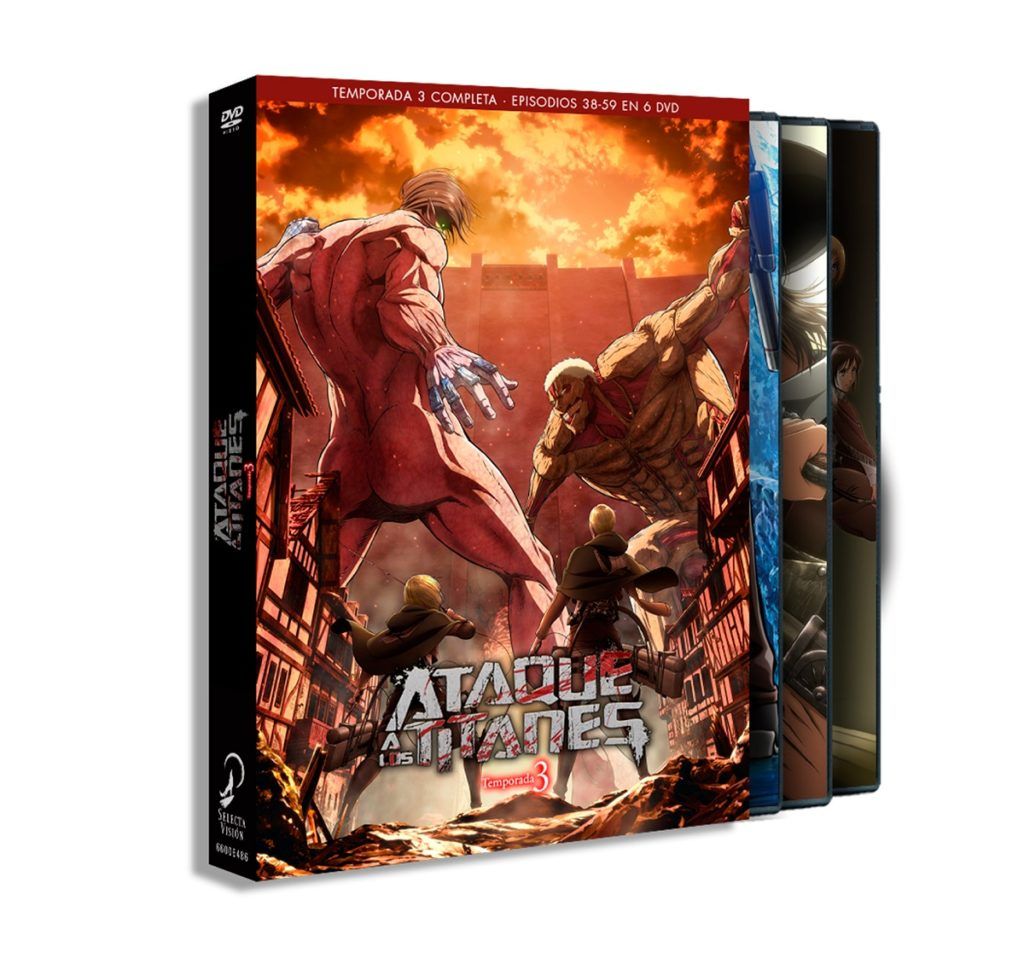 After releasing each part of the season in two packs and as usual, select vision decided to launch a new edition of Attack the titans in September 2021, this time complete. The pack on DVD collects the 21 episodes that make up the season on three discs and has a different cover illustration than those that accompanied the other two individual packs.

The anime can be enjoyed in its original version subtitled in Spanish or directly dubbed into our language. Fortunately for dubbing lovers, select vision seems to have found the key and the voices of season 2 remainwith which the distributor would give shelving the controversy that occurred with the change of cast between the first and second season.

Regarding the price, this is €39.99, which is somewhat excessive. The complete edition on Blu-ray costs only €10 more and includes extra content such as a booklet, shorts or a making-off, while this DVD edition that we are reviewing only includes the episodes. However, these types of complete editions are always appreciated, since they take up less space and invite more purchases.

That being said, is it worth getting it? how is this season Attack the titans? 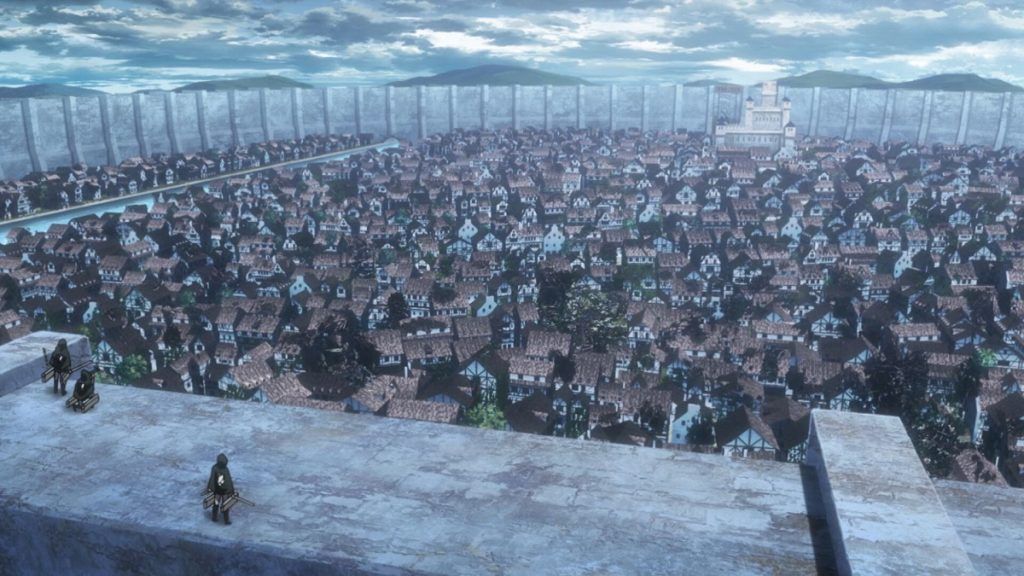 The first half of the third season of Attack the titans serves as a breather while the Survey Corps Gather your strength for the inevitable fight ahead. Except that dangers lurk closer what they believe when they find out that the pastor nick (the man who provided you with information last season about the false king) has been murdered. With all suspicions pointing to the Military police, the truth hidden within the walls will begin to come to light.

In this way, the third season delves into the ugliness of the last vestiges of humanity, since the members of the Survey Corps they are attacked by the very government they serve. The enemy is corruption and conspiracy, and both lead to learning the truth about the secrets of the titans. This means that the plot unfolds at a much slower pace than viewers are used to, but not at a consistent pace. The flashbacks arrive exactly at the time they’re supposed to be delivered, and the series flits between the various plot points in a way that doesn’t let one overshadow another.

All of this becomes a crucial part of the first story arc of this season, as the secret of the royal lineage changes the foundations of society within the walls. The second half of the story uses the information we have learned about the Titans and the royal family to look beyond Trost and towards a field that we know very well: the Wall Mariawhich will take place a battle that will test the emotions of any viewer. 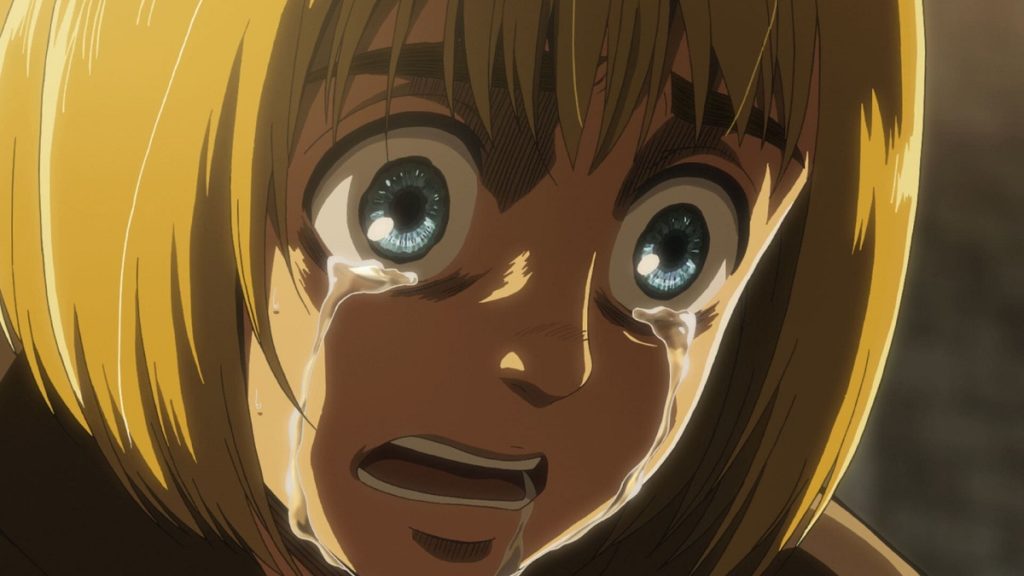 The battle to retake the wall offers big doses of action, with a specific focus on the most relevant titans (the Armored Titanthe Colossal Titanthe beast titan) instead of the monstrous horde for which the series is usually remembered. And, in this sense, the visual treatment of anime by witstudio remains as sharp as ever, especially in scenes where characters use the Three Dimensional Maneuvering EquipmentThey really convey the speed and urgency of the fight sequences.

These episodes have it all, giving each character their moment to shine., but specifically, two names stand out above the rest. Throughout the series, both Armin What Erwin they have repeatedly proven to be two of the most attractive and integral characters in the fight against the titans, and much of the success of this second part of the season lies in the role that both play in the plot. However, this is a war. Although victory is usually assured for the protagonists, they must pay a priceand one of the strongest action episodes the series has had is immediately followed by one of the darkest.

However, this battle is nothing more than a prelude to what this series really is, and It is in the last episodes when the door of Attack the titans. Finally we entered the basement of erenand the secrets contained in the diary of Grisha Jaeger they completely change the idea that one could have of history. Suddenly the world of Attack the titans It doesn’t seem so small or primitive, as the setting changes to a flashback in a world very different from the one we’ve seen before. Suddenly, the cyclical nature of violence becomes the focus of the series, and it manages to take on an even darker turn as the full tragedy of the situation is revealed. 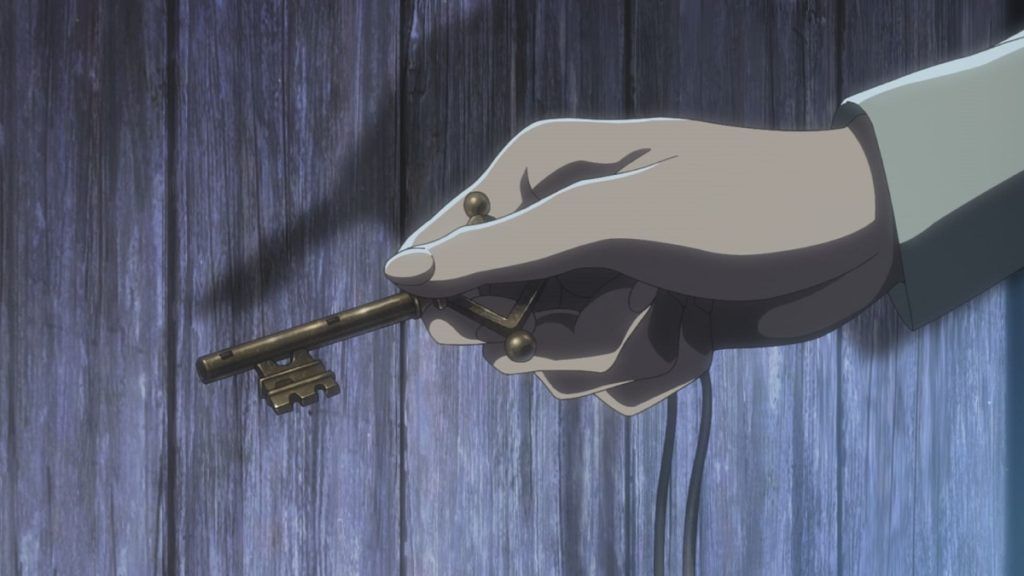 In this sense, it seems opportune to briefly address the controversy surrounding these revelations since they first met in the manga. While strictly in terms of the series itself in season three these ideas haven’t fully formed yet to get a clear consensus on them. The close visual parallels with Nazism and the Holocaust they are perhaps a little wrong in their presentation, but the intent does not appear to be malicious. Of course, all this can change when Zeke start interacting more with the cast and let’s get more information about the fight between the eldians and the marleyansbut in this third season it only raises a new wave of questions to be answered.

That being said, for me, the third season is the best of the series. While the first was the most shocking and original given the story, the second instead had a fiercer fight throughout its short duration. By comparison, season three combines the best of both worlds with some plot revelations that completely upend everything we knew. 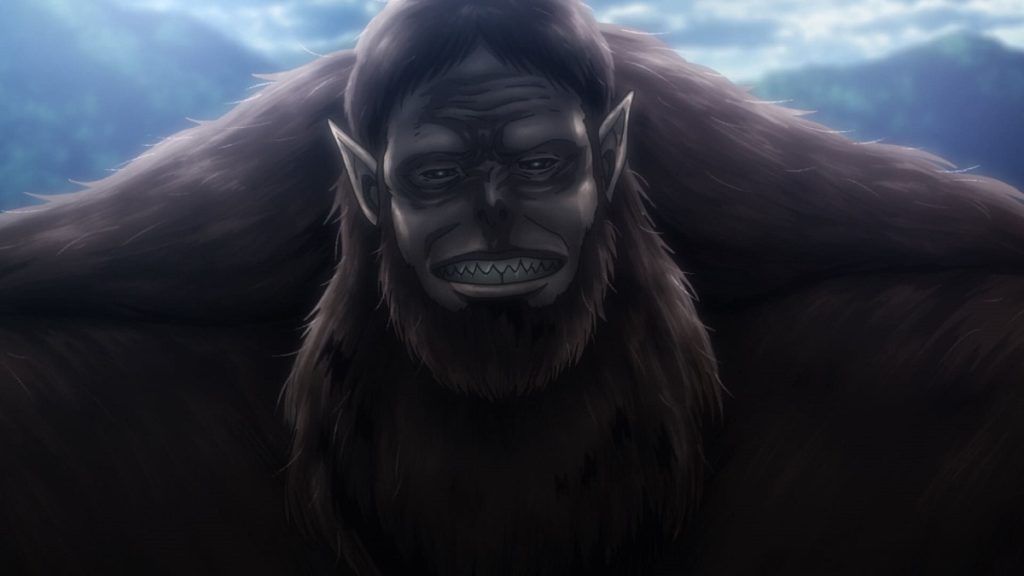 Although the first part of the season stood out for its political plot, it does not mean that it is not full of action. In the season premiere, a new antagonist was introduced, Kenny the Ripperleader of Antipersonnel Squad, as dangerous and ruthless as any Titan. And the battle between its members and the protagonists in the second episode is one of the most electrifying scenes in the entire series. The animators of witstudio they said goodbye in style (this was the last season that the studio ran before moving on to MAPPA) and they outdid themselves, since the versatility and agility of the choreography in this scene, attributed to an always impeccable Arifumi Imaiis awesome. 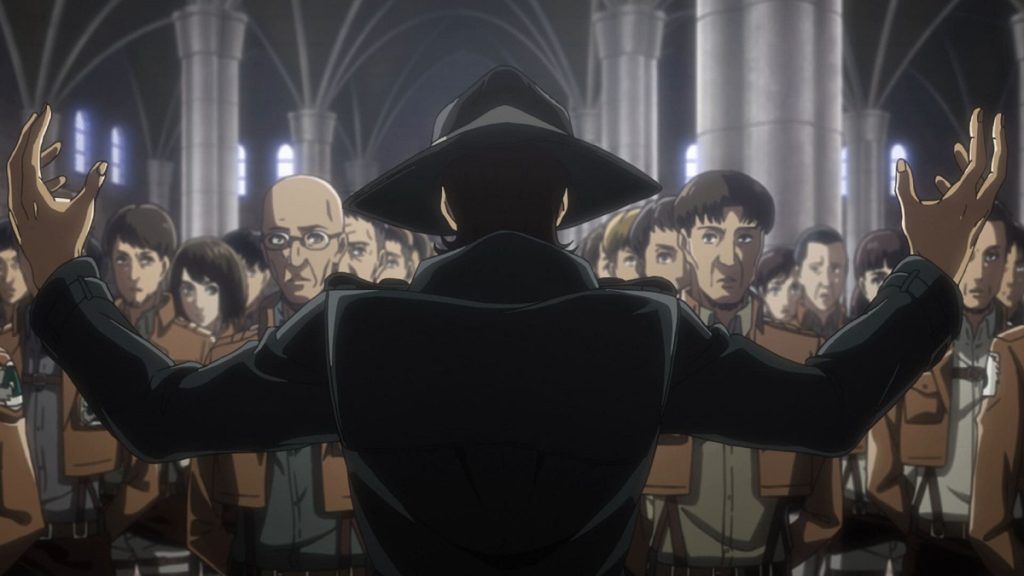 But for those who are still a little put off by the more expository approach of the first half, the second part of the third season kicks off with one of the most intense actions that have been seen in the series. The battle in shiganshina offers a lot of action with titans, but with a special focus on changelings (the long-awaited rematch against the Armored Titan and the Colossal Titanthe aces up the sleeve that the beast titan). Although I have to admit that in terms of general animation we have seen better results before. For example, him Colossal Titan made with CGI It is one of the most remembered, but not for being precisely well worked on in its movements and integration with the environment.

On the other hand, and in a much more positive tone, in some specific episodes there is a noticeable attention to detail typical of what we are used to witstudiowith well defined expressions, bright expressive eyes and precious backgrounds.

As for the music, this season continues with a amazing soundtrack and great sound quality. Hiroyuki Sawano once again achieves some incredibly epic and emotional music, which greatly complements the series. 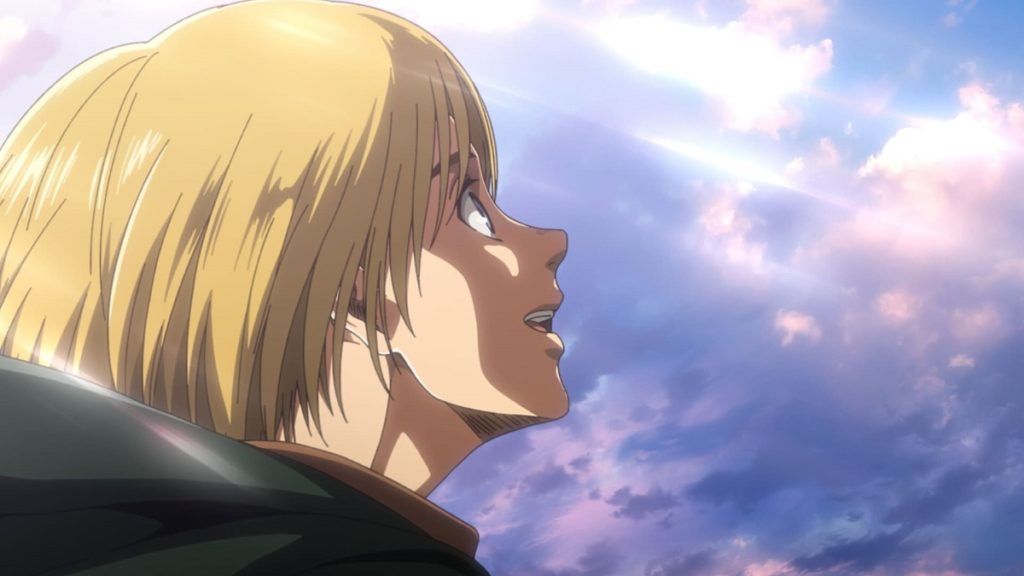 Same as him Colossal Titan, season three dwarfs its predecessors and it does so with unexpected twists, an interesting plot, and an outstanding technical section, which give this anime a unique place among the greats. The third season of Attack the titans is, without a doubt, a great anime season and having the physical edition of select vision It is a must for any self-respecting fan of animation. For my part, I know that I am going to enjoy it many more times. 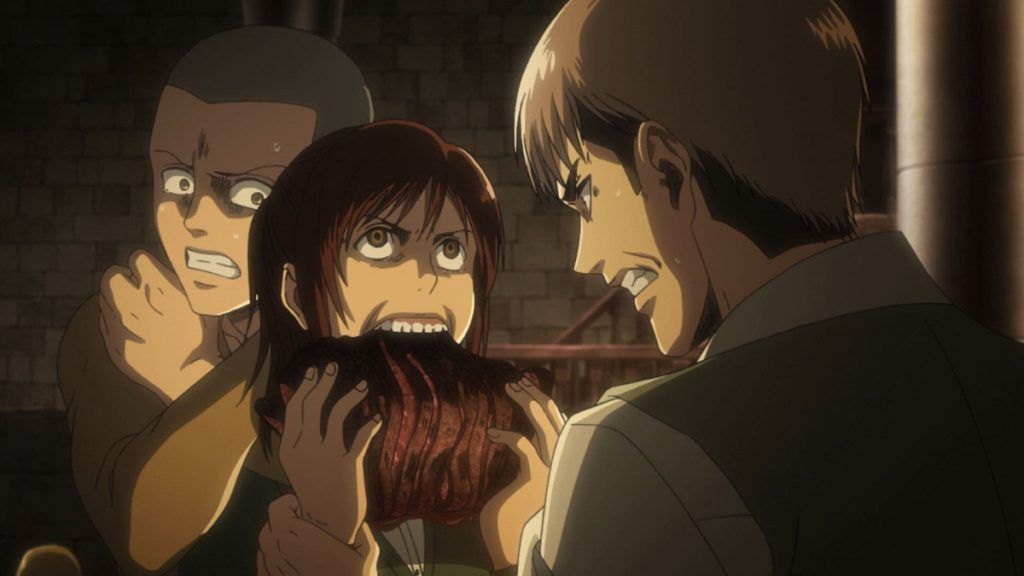