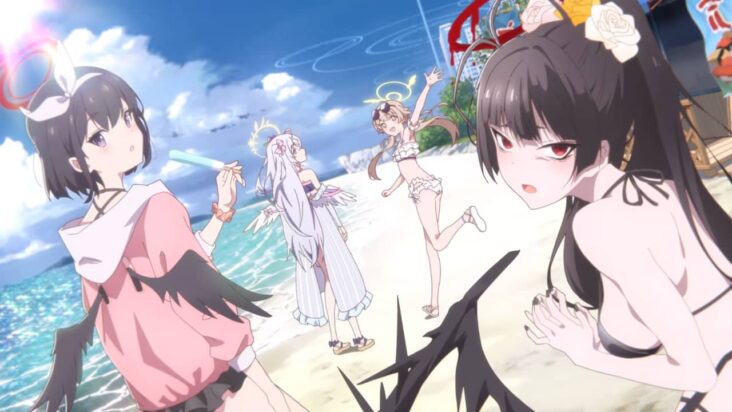 It is not surprising that it often happens that there is some type of censorship, whether in anime or manga, because companies decide that the public to whom that content is directed could generate certain negative events.

This time it happened to the Game of Role Blue Archiveand it is that on your server Japan an event called «Get Set, Go! Kivotos Halo Games» that began the October 26th will extend until November 9.

Where the characters are presented with new outfits, where two give their characters Hasumi and Yuuka have undergone modifications since the beginning, due to their really big figures.

And if we are talking about her breasts, which are relatively large and stand out too much, which is why advertisers have decided to solve this «inconvenience» by hiding their OPPAI in the advertisements of Blue Archive throughout Japan.

But well, we are all used to this kind of thing happening, although many times as fans we are excited when a franchise that many of us like makes an announcement and confirms that the respective visuals were going to be in certain strategic points.

And when we go to see them, we find that certain visuals have a very clear censorship like a poster that covers part of that visual, in this case Hasumi and her prominent breasts with the name of the event. Meanwhile he yuka it also appears censored so as not to show the part of his legs.

Finally, it is not to be expected that fans will remain silent in the face of this type of action, which is why this has caused some opinions on social networks, such as the following:

The role-playing video game Blue Archive is developed by Nexon Games and distributed by Shanghai Yostar Y Nexonwas released to the public in February 2021. In addition, Blue Archive is a free-to-play game with gacha mechanics and the publisher Nexon was in charge of distributing the game worldwide in the month of November of this year, being available on the platforms Android Y iOS.

Blue Archive takes place in the academic city of Kivotos. The player takes the role of «sensei», a teacher who is summoned by the president of the General Council of Students, a committee that manages schools, before his disappearance. Criminal activity increases after his disappearance, so Sensei is tasked with solving the problems related to Kivotos and helping find the missing president.