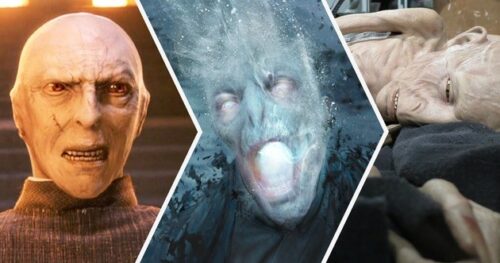 If you consider yourself a true Potterhead and you think you know everything about your favorite wizard, we challenge you to join us on this tour of 50 Harry Potter curiosities about books and movies that every true fan should know.

Guess the date of birth of these Harry Potter characters.

The patronus charm (to ward off Dementors) is a physical representation of a person’s soul. Both James and Lily are deer, male and female respectively, which is why they are a perfect fit.

It is for this reason that Professor Snape’s patronus, who was in love with Lily, was transformed into a cat when Harry’s mother died.

If Voldemort were to run into a boggart , the Amortal non-being would embody his own corpse, as death was always the greatest fear of Harry’s greatest enemy.

3. Dumbledore and the bumblebees

Dumbledore is a word that in Old English meant «bumblebee» (bumblebee).

Rowling said he chose that name because he imagined Dumbledore humming to himself.

Rowling has said that she nearly gave up on her promise to keep the star trio alive and nearly killed Ron in the middle of the series, coinciding with a particularly difficult time in her life.

Fortunately, it was not.

5. Hogwarts through the eyes of a muggle

If the Muggles were to discover Hogwarts’ whereabouts, they would come across a dilapidated building with a «Keep Out: Danger» sign on it .

During the filming of Harry Potter and the Prisoner of Azkaban , the team sewed the pockets of the robes that Tom Felton wore to prevent him from stealing food on set.

On the 10th anniversary of the death of Harry’s parents and thus the first time Voldemort was defeated, Harry and Ron saved Hermione from the attack of a troll in the school bathroom.

On October 31, 1991 it is considered since then as the day when the three became friends.

Both Sirius Black and Fred Weasley both died laughing. This is called bravely facing death …

In Harry Potter and the Prisoner of Azkaban , Trelawney refuses to sit at a table with 12 other characters because she would be number 13 and the first person to get up afterwards, she would die.

In Harry Potter and l to Order of the Phoenix , 13 members of the order are sitting and Sirius is the first to rise from the meeting.

The first five years that Rowling worked on the Harry Potter books were spent determining the rules for what her characters could and couldn’t do.

Rowling has admitted that the Dementors are a physical representation of her own experience with depression in her twenties, after the death of her mother.

In Harry Potter and the Deathly Hallows , Harry notices that Ron and Hermione had fallen asleep holding hands.

Hermione’s patronus is an otter , while Ron’s is a Jack Russell Terrier , known for chasing otters …

Daniel Radcliffe and Rupert Grint have admitted that they both fell in love with Emma Watson in the first movies, but the one thing that did not happen is a beautiful platonic love .

Tom Felton , who plays Draco Malfoy, originally auditioned for the roles of Harry and Ron.

The first Harry Potter book was published in 1998 , the same year that the final battle of Hogwarts was fought.

Herpo the Mad is the first known wizard to succeed in creating a horcrux … and feeding the first Basilisk.

The Professor McGonagall was a talented Quidditch player during his student years at Hogwarts, but had to leave after a bad fall.

Nicholas Flamel has a font named after him at the Beauxbatons Academy of Magic , which is believed to have healing and beautifying properties.

21. Dumbledore gets to see an invisible Harry

22. The scent of Amortentia

The Amortentia , the most powerful love potion exists, reminds people things that are most attractive.

Harry and Voldemort are distant relatives .

His ancestors date back to the Peverell family , like most wizarding families.

24. Inspired by a true story

Geoffrey Chaucer ‘s The Pardoner’s Tale is the story that Rowling was inspired by for Harry Potter and the Deathly Hallows .

The tale is one of many in the well-known book The Canterbury Tales.

When Kingsley Shacklebolt became the permanent head of the Minster of Magic, he forbade the use of Dementors to protect Azkaban, and anywhere else in the wizarding world.

26. Albus through the looking glass

During their first conversation in Harry Potter and the Philosopher ‘s Stone , Dumbledore tells Harry that sees itself holding a pair of thick wool socks increasingly looking into the mirror of Erised ( Erised in English).

However, what the Hogwarts headmaster actually saw was his entire family, alive and well. Basically the two most important things to Albus: seeing his beloved sister Ariana alive and Aberforth forgiving him.

27. Death of the Phoenix

When Dumbledore died, the phoenix Fawkes died with him.

Although Hufflepuff gets a bad rap for being too good and naive a House, Rowling has always said it is one of her favorites.

The young man could have been the Chosen One instead of Harry, which would have meant that Lilly would have lived. And we already know Snape’s love for Harry’s mother …

Richard Harris , the actor who played Dumbledore in the first two movies, only took the role because his granddaughter swore that he would never speak to him again if he didn’t.

31. Inspiration in the air

The names Gryffindor, Hufflepuff, Slytherin and Ravenclaw were first written on the back of one of those seasickness bags (i.e., to throw up in case of need) that JK Rowling had to use during a plane trip. , because he didn’t want to forget the names before landing.

The name of Mundungus Fletcher , one of the members of the Order of the Phoenix, is because the character is always smelling his pipe … and other unpleasant things.

Mundungus is the name used to refer to cheap and bad smelling tobacco.

Plants with strange names from the wizarding world really do exist.

Mugwort (mugwort), Mandrake (mandrake), and many others were drawn by the author from a book called Culpeper’s Complete Herbal.

To avoid injury, the actors were told not to play any contact sports during filming.

Because of that, many of them took up golf , as it was considered relatively safe.

Helena Bonham Carter had to wear fake teeth for her role as Bellatrix Lestrange .

After finishing the filming of the last film, the actress stayed with them, since they were made to measure and only she could use them.

Crying Myrtle is inspired by all the girls who cry in the bathroom of bars and clubs, according to JK Rowling.

39. Father there is only one

Harry’s father, James Potter , appears in all the films except one, Harry Potter and the Half-Blood Prince, the sixth in the saga.

40. Everything is in the family

One of Rowling’s longtime friends is a fan of the West Ham football club , which is why the author included the team in the books as a personal nod.

The club’s former player, Jonjo Shelvey, was compared by the fans themselves to Lord Voldemort himself.

42. Rowling wants to be invisible

JK Rowling has confessed that, if she could choose a power, she would stay with that of invisibility … so she could be writing all day in a cafeteria without anyone noticing her.

In Harry Potter and the Goblet of Fire , the actor was not allowed to write Harry’s name because his handwriting was horrible and a prop person had to write it on a piece of paper for him.

44. Ginny was always destined to be with Harry

Rowling had been planting the seeds of this relationship for a long time, albeit in subtle ways, like when Ginny beat Cho Chang competing at Quidditch.

45. The Divination Classroom is the same as the Defense Against the Dark Arts class

During filming, the same set was used for the two rooms, changing furniture, colors and curtains when changing from one to the other.

During the filming, the young actors took the opportunity to do their real class assignments to achieve a school environment that was as credible as possible.

During all the films, only one expletive was used once: bitch.

It was uttered by Molly Weasly before killing Bellatrix Lestrange.

When she had more than half written on Harry Potter and the Goblet of Fire , Rowling noticed a giant hole in the plot that made it even more complicated, so she decided to go back and amend it.

This is why the book is so long.

49. Hagrid was always destined to live

Fortunately, the author always had in mind the image of the good-natured giant carrying a supposedly dead Harry after a great battle at Howgarts, which was later reflected in the last film.

The International Statute of Magical Secrecy has very clear guidelines on the wardrobe and clothing that wizards must wear when living with Muggles . In short, they must respect the fashions of the moment and forget about tunics. However, many magicians have a real dislike for pants and prefer their private parts to be kept cool underneath their capes and robes.

A fringe movement called FART , that is, Fresh Air Refreshes Totally, was even started as an attempt to counter the wearing of pants. Long live wardrobe freedom!