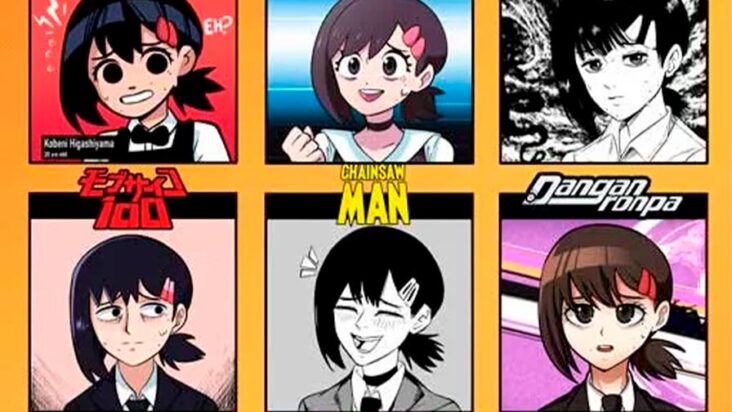 I came back to this website, I had it a bit inactive just because I was on other projects, but I have already organized myself and will post daily content on All About Chainsaw Man, so you can visit this website every day and you will have something new. This time I bring you a fanart of Kobeni in 9 different styles that I really like, I hope you enjoy it.

The art was published by the Kermittend Twitter account on September 14, 2021, I know it’s been a long time since it was published but I still wanted to have it here. The publication at the time of writing this has more than 23 thousand likes and more than 4 thousand RT, it certainly received a lot of support and I suppose many like the art as much as I do. This is when I want to see Kobeni in more styles, I wonder if she will have any part 2, I don’t know so I’ll check her profile.

I swear I thought I would not find a second part, it sounded good enough to be true, but I searched his Twitter and found a second part with Kobeni in 9 new styles, the publication was made on March 30, 22, it has a short time that the I mean, if I had written this a little earlier I wouldn’t have found it, among the new styles is Jujutsu Kaisen, Adventure Time and One Piece, I’ll also leave Kermittend’s official post.

I had previously seen this format of a character in different animes, luckily I found this fanart and we can see Kobeni with the style of Pokémon, Envangelion, scott pilgrim, among others. I think my favorite art of the 9 is that of Evangelion and Pokémon, some of the styles that the author used I don’t know but I still like to see Kobeni with another style than Chainsaw Man.

Kobeni but make her in 9 artstyles because I am a masochist pic.twitter.com/OgDxjQiEk3

Looking at Kermittend’s Twitter it’s very clear that he loves Kobeni’s character and that’s why he has gifted us such amazing arts, I think we would all like to see more Chainsaw Man characters with different styles, I have some Kobeni saves on other animes or movies, i will post some after this one.

While looking for the second part of Kobeni’s styles I found another amazing art, it’s about Kobeni solving, the great thing is that we can see the Angel from Evangelion in the window, Kobeni really should be a bit more worried, he doesn’t seem to mind having an Angel at the window, Shinji is sure to be there.

What did you think of the Kermittend arts? Seeing Kobeni in other anime is great, I love the community so much and I really appreciate all this kind of content that they give us, I guess that’s all for this article, so thank you very much for reading Kobeni Higashiyama in 9 different styles – Kobeni Higashiyama fanart, I hope you liked it as much as me.