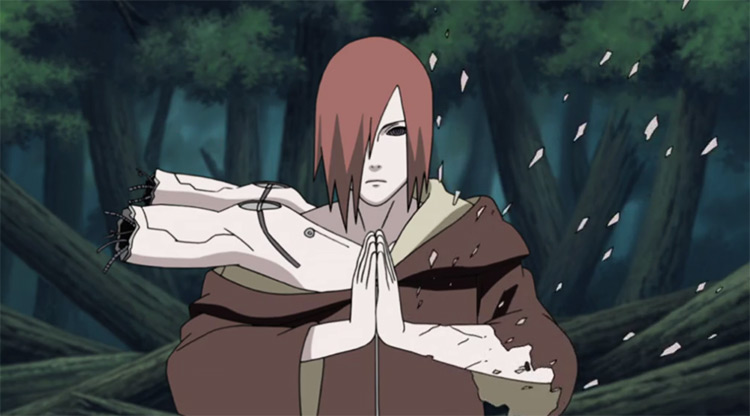 Naruto has a large number of ultra powerful characters, but there are some that stand out far above the rest . This is the top 10 of the ninjas with more power of this mythical anime that always increased its power level.

Which Naruto Girl would be your girlfriend «Waifu»?

This ranking includes only characters and power levels understood until the end of the Fourth Great Ninja War, so everything that happens after this event is left out; that is, the entire Boruto chronology is excluded.

The only ninja Madara recognized as his rival was Gai, who awakened all the chakra gates and blew himself up in order to stop the threat posed by the infinite tsukuyomi. Sure, he couldn’t stop him, but no one could fight him like this.

Like other ninjas of his class, he does not use any type of ninjutsu and all of his chakra is focused for close range skills. While his power is not comparable to others in the same sense, by opening all the doors it would be difficult for someone else to beat him.

Many see Itachi as a demigod… and he practically was. He managed to turn all the abilities of the Uchiha, hidden or recognized, into tools to take care of Sasuke and make him also awaken his own abilities.

Before Naruto and the other characters began to reveal their transformations and different uses of chakra (such as Jiraiya’s toad chakra, the six path chakra, etc.), Kishimoto himself said that he was the most powerful ninja in existence. … but that did not last long.

Itachi was the most powerful ninja in all of Naruto for a period of time | Source: Pierrot

The legendary sanin and hero of thousands of battles managed to raise his power to the maximum shortly before falling in battle against Pain. His use of the toad chakra to access his «wise» mode endowed him with a level of power that was second only to Pain’s rinnengan.

Jiraiya, at the same time, was the culprit that Naruto found even more ways to exploit his power and chakra modes thanks to the power that Kurama conferred on him, as well as the fact of being also the reincarnation and descendant of the lineage of the creators of the chakra, but this would not have been achieved without Jiraiya.

The copy ninja not only ended up being the hokage after the last ninja war, but he also mastered techniques that were only available to beings that were literally divinities, such as the perfect Susanoo.

Also, he got Obito’s eyes and that gave him even more Uchiha abilities and powers, even though he was never part of this clan. On the other hand, all of his abilities, despite being stolen, were fueled by his infinite knowledge of chakra and ninjutsu.

He was believed dead but he was out on the town. He was one of the first Uchiha to develop the mangekyo sharingan, after he watched Kakashi kill Rin. This made him his disciple but also helped him discover techniques that no other ninja had ever achieved before.

Towards the end of the Fourth Great Ninja War, Obito also became the 10-tailed beast (yet another, of course) and used the jutsus of the sage of the six paths. He was only defeated by Kaguya, the creator of the chakra and life itself.

Obito was not dead, he was hanging around kidnapping children to extract their demons | Source: Pierrot

Before Madara’s appearance, Pain was without a doubt the most powerful villain that could exist within Naruto. Having the rinnengan, the most powerful eye technique of the three, he made the most of it to through it, purify with the pain of others.

His six vessels were also a good sample of his power, which was spread throughout his body and not only that, but also improved every time he revived himself. He was only able to destroy the entire Leaf Village in the best arc in all of Naruto.

Pain is the best villain in all of Naruto, whatever you do | Source: Pierrot

Arguably he surpassed Madara, but really his power is on a scale a little less than anything the most infamous Uchiha ever achieved. Sasuke is the reincarnation of one of Kaguya’s sons, making him literally a deity in the body of a mortal.

Likewise, the sage of the six paths gave him access to his chakra and awakened the rinnengan naturally, unlike Madara. On the other hand, the combination of his chakra modes, as well as his knowledge and, above all, his hatred, made him more and more powerful.

Sasuke is the reincarnation of the first carrier of the sharingan and creator of genjutsu | Source: Pierrot

He came back from the dead and came close to destroying the world awakening the infinite tsukuyomi. His power is not only about colossal strength and full chakra mastery, but he also became the ten-tailed beast and obtained the works of truth from the sage of the six paths.

This without counting that by himself, he was powerful enough to put the entire shinobi alliance at bay, which did not present resistance until Naruto arrived, who was able to face him and his other allies.

Naruto is the protagonist and for that reason he must also be the most powerful being within the «logical» ranges of the anime. He overcame any kind of barrier thanks to the power of Kurama’s chakra, in addition to his mastery of the toad chakra and, finally, the six paths chakra.

He himself was able to lead the shinobi alliance in the Fourth Great Ninja War against Madara and, in addition, he faced Kaguya herself with techniques that no one would have imagined would serve even a little, but they did it because … well it is the protagonist.

She is literally the goddess of the Naruto universe. She was the mother of the sage of the six paths and also, if that were not enough, she is the creator of the chakra, so all her abilities are beyond human understanding.

This also makes her a character without any limits. She has all the abilities that a ninja can think of within Naruto, from the three doujutsus (sharingan, rinnengan and byakugan), to control over any type of chakra, not to mention that she herself is the 10-tailed demon.

Too bad her last weakness is half-naked men.