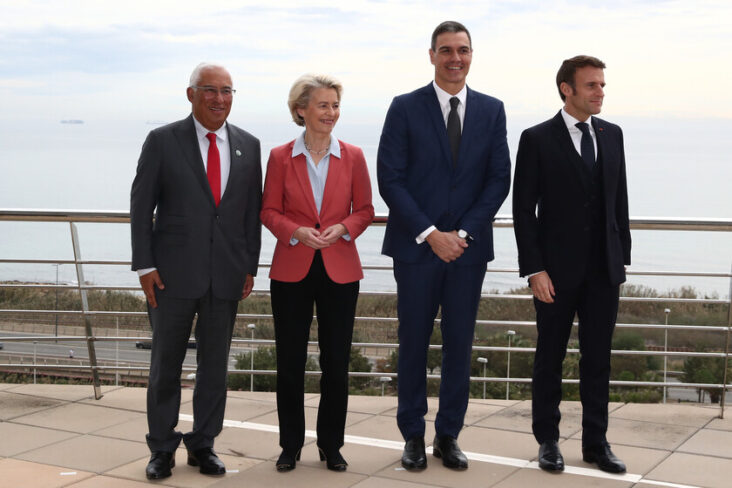 With the energy crisis and the mission to cut dependence on Russian gas and oil as a backdrop, the transition to clean energy —explained yesterday the President of the European Commission (EC), Ursula von der Leyen— has already become “ not only urgent, but vital”. With this well-defined purpose, Spain, France and Portugal have just staged in Almería their commitment to the H2Med green hydrogen corridor, an infrastructure that Von der Leyen herself seems to look favorably on. “He is going in the right direction. It has the potential to help us.» assured on friday.

The support, both from Madrid, Paris and Lisbon, as well as from the EC president herself, is not a minor issue for a key project that aspires to move forward with community support.

What is H2Med? In its own way, the infrastructure that takes over from the frustrated MidCat, a trans-Pyrenean gas pipeline that had the support of Madrid but not Paris, which opposed its route through the Pyrenees. To undo the situation a little less than two months ago, in October, the Executives of Spain, Portugal and France announced a “political agreement” which left aside the gas pipeline and promoted, instead, an «energy corridor» that would interconnect the Iberian Peninsula with the rest of the European Union through a channel between Barcelona and Marseille.

Little more was detailed then about a project that was baptized as BarMar, except that its objective it would be the transport of green hydrogen; that yes, through an infrastructure prepared for other renewable gases and —even more important— “a limited proportion of natural gas as a temporary and transitory energy source”. In addition to the Barcelona-Marseille maritime pipeline, the agreement included a commitment to the CelZa connection, a pipeline between Celourico a Beira (Portugal) and Zamora.

What else do we know about the project? Its details were thrown away with a clear horizon: December 9, the date of a summit of leaders from southern Europe in which the representatives of the three countries would meet again. The meeting was held yesterday and served for various purposes: outlining technical details, stressing the support of the Executives and, just as important, showing that Brussels sees it favorably a priori. It is not a minor issue if one takes into account that the H2Med project will require an investment of around 2,500 million euros and the approval of the EC may depend on the fact that between 30 and 50% of this disbursement leaves the community coffers.

«I endorse your presentation». Of all statements that yesterday they launched on H2Med, perhaps the most relevant, from what you can anticipate with a view to its financing, was left by the leader of the European Commission. “The Iberian Peninsula is destined to become one of the main energy centers in Europe. And the EU will be part of this success story […]. A hydrogen corridor through the peninsula can connect with the hydrogen supply of the Mediterranean region, ”von der Leyen celebrated yesterday, who even dared to go further in his statements.

“I warmly welcome this agreement between France, Spain and Portugal because your H2Med project is absolutely going in the right direction. It has the potential to help us build a true European hydrogen backbone. I support its imminent presentation to make it a project of common interest, which would make it eligible to request financial support from the EU”. That is precisely what its promoters propose to do: present the project to the EC in a matter of days, on December 15, with the purpose of receiving the project of community interest label, PCI, for its acronym in Spanish, as soon as possible. English, key for financing.

What do we know about the technical details? Since the project was presented in October, some technical details have been revealed. The infrastructure rests on two large legs: a 248-kilometre land pipeline between Celorico da Beira, in Portugal, and Zamora, at a cost of around 350 million euros; and the submarine link between Barcelona and Marseille, a connection that —details The country— will measure 455 km and reach a maximum depth of 2,557 meters.

Once on the French coast, it can be distributed to other enclaves on the continent, such as Germany or Italy. The objective would be for construction to start at the end of 2025 or the beginning of 2026 and the infrastructure to be ready by 2030. In any case, the procedures for a trans-European structure would influence the calendar, which includes both the requirements for an endowment of this such as the approval of the countries themselves. The BarMar would move every year two million tons green hydrogen. H2Med would thus reach 10% of the renewable hydrogen target set by Brussels in the «RePower EU» plan, which sets a goal of 20 million tons by 2030.

🇪🇺 The European president @vonderleyen analyzes the role of Spain as a global power of Green Hydrogen in the presentation of the #H2Med pic.twitter.com/kIxL9KRcgE

Are there challenges on the table? At least, questions remain, such as specifying the technical characteristics, schedule and financing, the latter aspect in which the statements released yesterday by Von der Leyen are key. Another key is what will be channeled through the conduit. In October the door seemed to open to «a limited proportion of natural gas» on a «limited» and «transitory» basis, but to achieve the PCI community label the structure should focus on gases of a renewable nature, a category in which no natural gas would enter.

The project is relevant because it aspires to take advantage of the potential of the Iberian Peninsula, with its capacity for the generation of photovoltaic and wind energy, with coasts yet to be exploited for offshore facilities, a key muscle for the production of green hydrogen. France I would also raise however incorporate into the pipeline «pink hydrogen», in which nuclear energy participates, with a relevant weight in the country. The discussion on that aspect is still on the table.