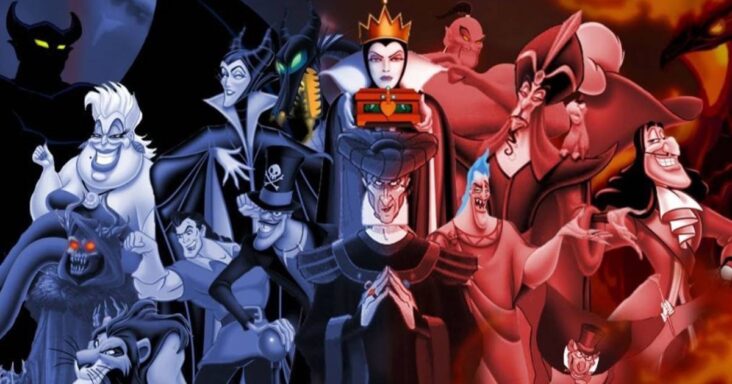 Disney villains are undoubtedly part of the appeal of their movies. Some of us gravitate more towards the heroes, but without a doubt some of these villains are beyond irresistible. In this list we will name the most important at our discretion. Let the evil plans begin! 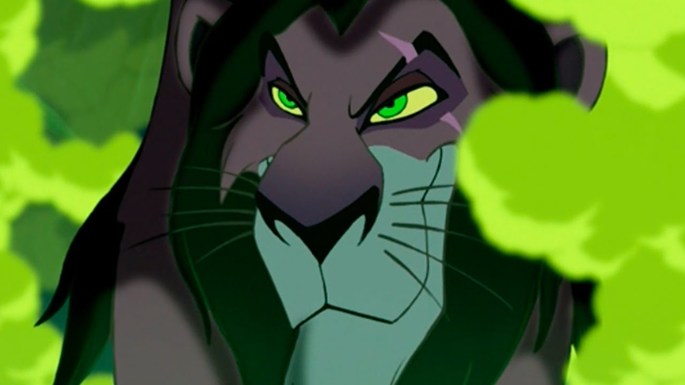 The Lion King is based both on the Biblical stories of Joseph and Moses, as well as on Hamlets, from Shakespeare. Thanks to this, Scar is the roundest Disney villain ever written. He is Machiavellian, evil and destructive.

One of the most important scenes in the film is the death of Mufasa, but the way Scar betrays him and taunts him is a trauma shared by all children who have ever seen the film. Using the death of his brother as a way to usurp Simba’s throne, he manages to bring all of his subjects to their knees in no time.

However, his ambition and selfishness make many of his henchmen turn their backs on him. When he is finally defeated, he feels like a worthy victory for our heroes. 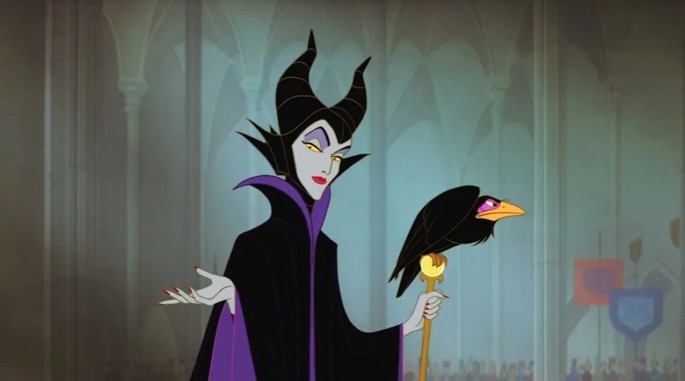 maleficent, and Sleeping Beauty, are based on the book of the same name, written by Charles Perrault. The fable was originally published in 1697.

Maleficent is one of Disney’s most memorable villains. The most relevant thing to note about this woman is that she transforms into a fire-breathing dragon. She is a powerful sorceress, an unfeeling antagonist, and is capable of holding a lot of grudges.

His ego is so big that the reason behind his evil acts is as simple as an invitation that never came. And in the act, she devised a revenge that would be fulfilled 16 years later. Also, with his dragon powers, he almost wiped out the entire kingdom. Úrsula is a controversial villain, based on the unforgettable drag queen, Divine. Mixing her cruel personality with a special dark humor, Úrsula is a villain impossible to ignore. The story of The little Mermaid is loosely based on a fable written by Hans Cristian Andersen.

One of the most remarkable things about Úrsula was her ability to convince, tricking Ariel into giving her her voice. In addition, she had some of the most terrifying Disney minions, the electric eels Flotsam and Jetsam, not counting the garden of unfortunate souls.

Ursula preyed on her victims at their most vulnerable moments, which makes her terrible as a villain.

4. Claude Frollo – The Hunchback of Notre-Dame 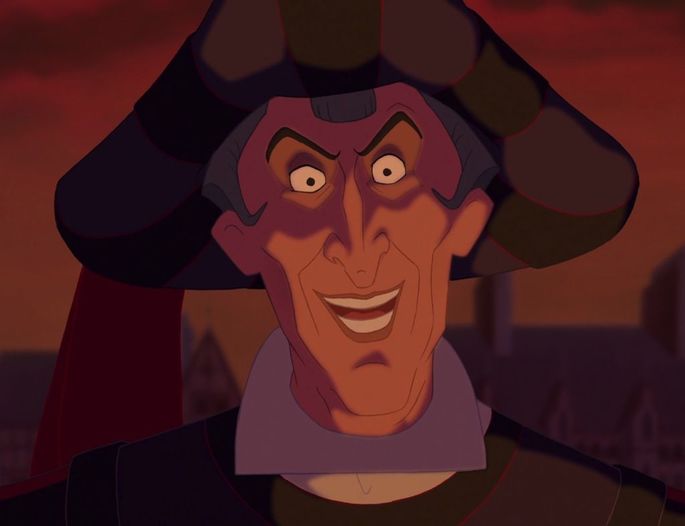 The infamy of the Frollo is indisputable. Normally, Disney touches on dark themes in his movies, but The Hunchback of Notre Dame takes that notion a bit further. The animated feature film is based on the work of Victor Hugo, Our Lady of paris.

Frollo is a member of the church who adopts (and names) Quasimodo – which means «deformed» – an orphaned baby with physical disabilities, who loses his parents, unknowingly, at the hands of the same man who adopted him. The boy was the son of gypsies, and Frollo was a genocide who wanted to wipe out as much of the gypsy population as he could.

He is a sinister and hypocritical man, since his wickedness justifies it behind the cloak of a «divine punishment». And as if that were not enough, many of his actions are based on the fact that Esmeralda, being a beautiful woman, is a great temptation for a church member like him.

5. Gaston – Beauty and the Beast 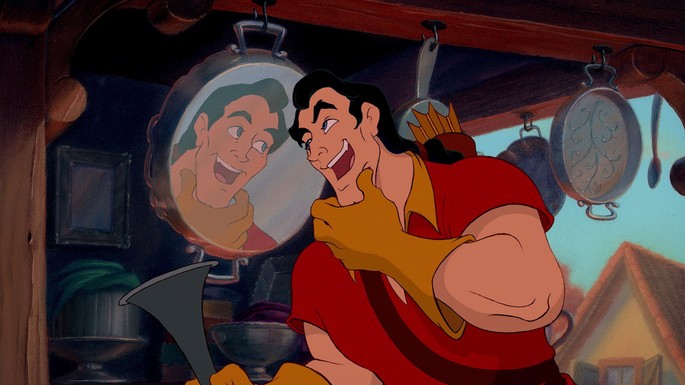 The story behind Beauty and the Beast It is based on the fairy tale by Jeanne-Marie Leprince de Beaumont that was published in 1756. In addition, it is inspired by the French film of the same name, directed by Jean Cocteau.

Gastón’s crime, aside from being a misogynist, is that he was never really very smart. But his true evil is deeply rooted in his delusions of grandeur, which lead him to believe that he deserves everything in this life, and for everything, including the women he takes his fancy.

At the moment of being rejected by the heroine of the story, Gastón tries to kill the Beast, and uses his status and appearance to convince the entire town that they should take revenge on his behalf. He never deigned to think for a single moment of others, but everyone around him believed that he was a gentleman full of benevolence. 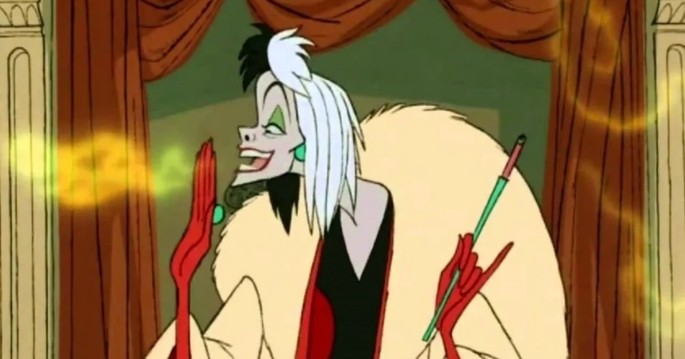 101 Dalmatians is based on the novel. The Hundred and One Dalmatians by Dodie Smith, from 1956. Cruella de Vil is the epitome of evil with such a name. His behavior is so obnoxious that it is difficult to consider that it was captured on the big screen.

She’s elitist, sociopathic, but always glamorous. She is so vain that she is capable of doing anything to get the image she wants to present, including killing. So unscrupulous that her main objective is to use the skin of innocent puppies to make a coat. 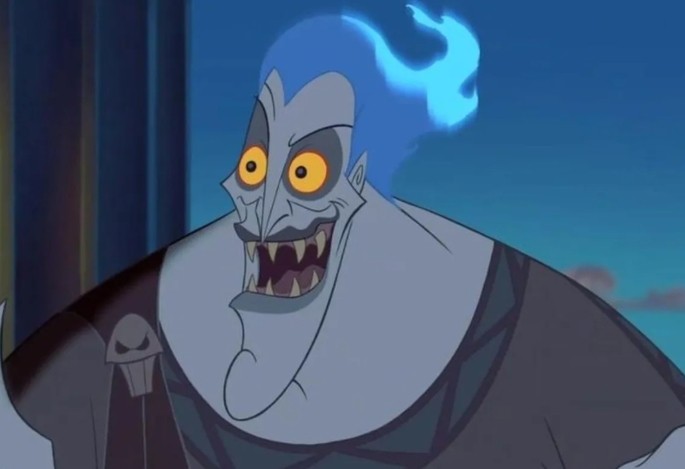 If there is a villain who mixes humor with evil very well, it is Hades. The narrative of Hercules It is based on the Greek myth of Heracles, the son of Zeus. The mythological character is recognized by his 12 works, which are briefly captured in the film.

But by focusing on Hades, the god of the underworld, we have a sarcastic, and relatively charming character. He is one of the funniest of the Disney villains, boasting great intelligence, great magical abilities, and brilliant plans. Another thing to note is his «relationship» with Megara, who serves as a kind of bait for his evil plans. 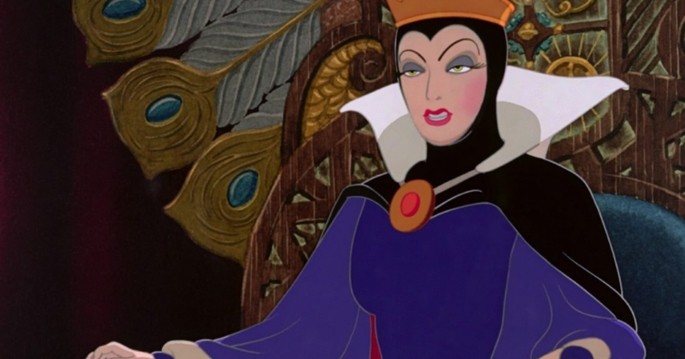 The Evil Queen may have been the reason negative stereotypes of stepmothers were created in the first place. Snow White is based on a German fairy tale written by the Brothers Grimm, and is Disney’s first animated film.

Grimhilde, also known as The Evil Queen, was obsessed with beauty. Because of this, she feels threatened by Snow White, the daughter of her husband, who is under her care. She is able to send a hunter to finish off the girl, but when he is unable to finish the job, she takes matters into her own hands with a poisoned apple.

We should also add that in order to poison Snow White, she has to chase her, harass her, and disguise herself as a seemingly harmless old woman. To say that this monarch is crazy is an understatement. 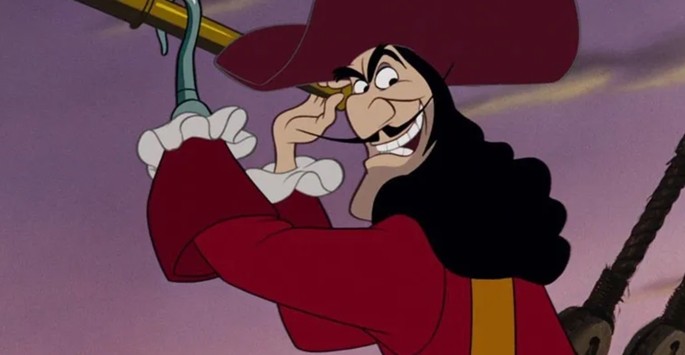 Peter Pan It is based on the 1904 play, Peter Pan by JM Barrie. Captain Hook is a pirate who has a good reason to take revenge on young Peter: he once caused him to lose an arm to a crocodile. Plus, he has one of the funniest personalities among Disney villains, with hints of childish brat that, at least, don’t make him terrifying.

Hook’s problem is that yes, his obsession was great, but so was his clumsiness. He was so fixated and obsessed with the idea of ​​making Peter pay for his crime, that he couldn’t concentrate on anything else. And he was very close to achieving his goal, if it weren’t for that great fear that he has of the sound of a clock. 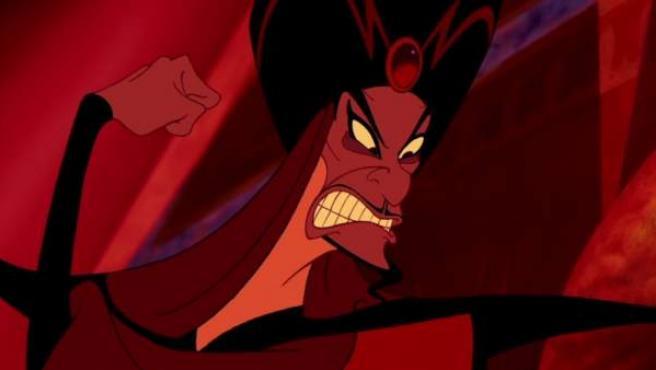 Aladdin is based on the Arabic folk tale, Arabian Nights. And its villain, Jafar, is also a milestone for Disney. Eager to gain more power, he is able to manipulate anyone he can: from common thieves to gullible sultans. Jafar was ambitious and cruel, which made him very dangerous.

His intelligence leads him to become the sultan’s consultant, which gives him a place among the powerful. This makes fooling both the court and the subjects even easier. But luckily, the sultan’s daughter, Jasmine, knows how to look behind her façade. Jafar, however, when threatened, is able to sell his soul for a little more power. And this proves to be his downfall, luckily for our heroes.

11. The Queen of Hearts – Alice in Wonderland 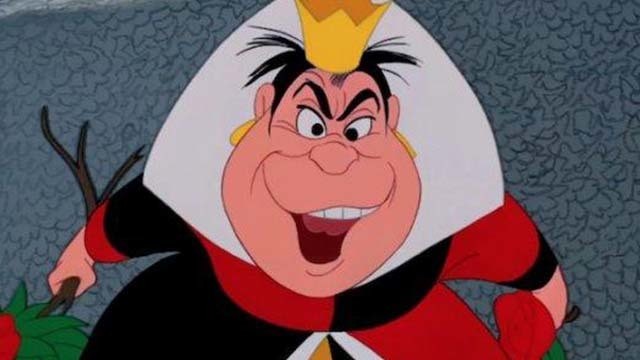 Based on a story by Lewis Carroll, Alice in Wonderland It is a very curious feature film. But if we focus on the Queen of Hearts, only one phrase comes to mind: Off with his head!

If there’s one thing we’ve learned from this list, it’s that positions of power fit evil villains like a glove. In the case of this Queen, she proves to be a spoiled adult who only puts up with things being done her way, and she puts all of her subjects to suffer from her under her inconsistent and almost impossible demands. 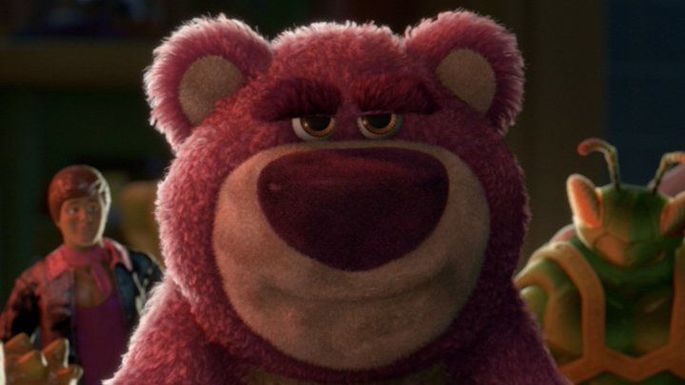 Lotso is one of Disney’s most impressive villains, but mostly because of his looks. When Woody and his friends arrive at Sunnyside Daycare, Lotso seemed like an ally. But little by little they discover his Machiavellian tendencies, where he treated his fellow toys as tools and prisoners.

Because of this bear we have one of the most traumatic scenes in the history of toy story, all our favorite toys on the way to the incinerator. The teddy bear is sinister, but for a reason: he feels rejected and abandoned by humans. Perhaps the ending they gave him was worthy of someone who needed to learn about goodness again. 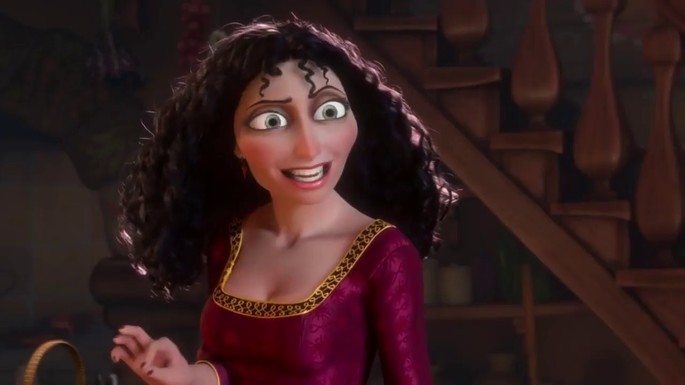 We have to name Mother Gothel for being another vain woman, obsessed with her beauty and youth. tangled it is based on Rapunzela German fairy tale compiled by the Brothers Grimm in 1812.

When the evil Gothel discovers that the king’s daughter had hair with magical properties, she kidnaps her, separating her from her parents and adopting her as her own. But if she had been a good mother, she would be forgiven… perhaps. However, she was cruel to Rapunzel. He kept her locked up throughout her youth inside a tower, hiding her from the outside world to prevent him from discovering her origin. And because? In order not to grow old.

Despite this, it has an excellent song. Maybe that’s why Rapunzel believed his lie for so long.

In the case of this feature film, the story is based on Peruvian culture. We follow an arrogant emperor named Kuzco, and his adviser, Yzma. Yzma is charming because of the kind of villain she claims to be. She is eccentric, glamorous and full of ambition. Her idea is to seize the power to be Empress.

However, he has a helper who makes his life more difficult than easy, and his clumsiness is endearing. Instead of giving him a potion to poison Kuzko, they end up turning him into a llama by mistake. It’s impossible to take them seriously as villains, but Yzma and Kronk make The Emperor’s Follies be one of those hidden Disney gems that not everyone appreciates. 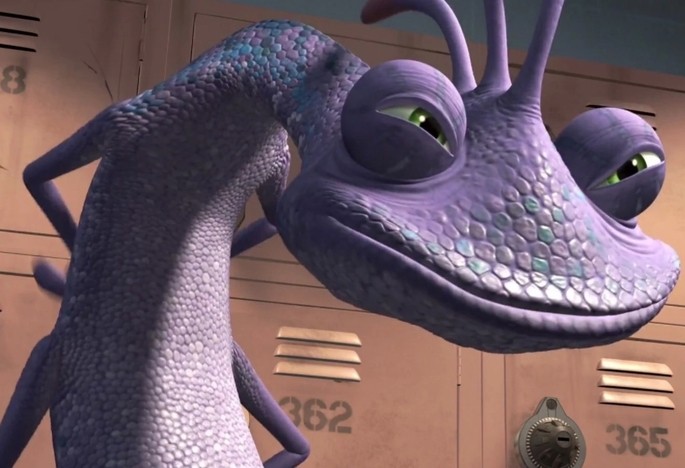 What about Randall Boggs? One of his characteristics is to be terrifying and become invisible. The problem with Randall, moreover, is that envy eats at him. Always in competition with Sully, this chameleon is capable of doing anything to earn the prestige he believes he deserves.

This unscrupulous being was able to create a device that would hurt children and force them to scream in an unethical way, and his behavior is perfectly reportable.