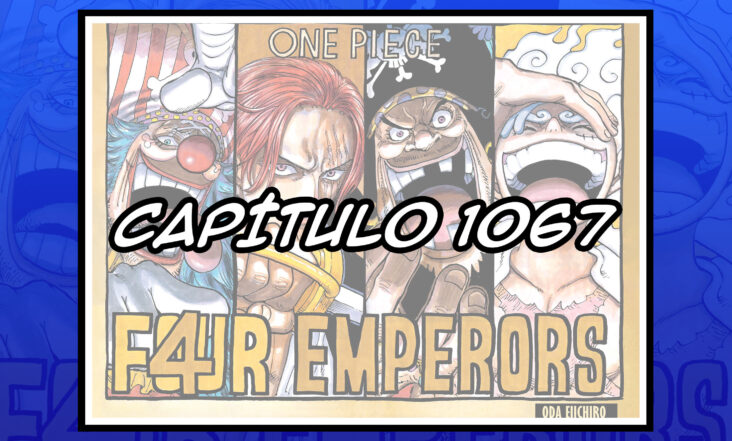 And another Sunday, here we are punctual. Because what is it playing? New chapter of the manga one piecethis time 1067: Punk Records! Since super-fiction We review everything that happened in the popular work of Eiichiro Oda. Remember that you still have time to see the latest movie in the series in theaters. And if you have already done it, we leave you here our extensive analysis and compendium of curiosities about One Piece Film Red.

In the previous chapter, we witnessed the first brushstrokes of what happened in the famous Empty Century. vegapunk told the Mugiwaras that an ancient civilization of advanced technology, was reduced by the rest of the kingdoms. This information was collected by Clover and the rest of the scholars ohara and therefore the island was reduced. In addition, we were able to see the true appearance of the Doctor Vegapunk and discover that Saul still alive. So that: what happened in this chapter 1067 of the manga of one piece? We do not make you wait any longer, we tell you:

One brain to remember them all

We start the chapter with bonney asking vegapunk, with notable anger, that what has become of his gigantic head. He answers that, due to its excessive size, which was already equal to that of a giant, had to cut off his head. As you read It also tells that ate the nomi nomi nomi fruit that turns him into a brain man. It has the ability to memorize knowledge without limits, although the more knowledge, the larger size.

The doctor says that his brain was already so big that had to store it on top of the islandinstead of the gigantic sign of Vegapunk Records and that it can connect to it at all times thanks to the antenna on its head. On the other hand, she recounts the function of its separation into six parts. And it is that, although each one is in charge of a different function for mere reasons of practicality, once a day, everyone connects to the colossal brain to share their experiences and knowledge.

Apparently, vegapunk dreams that, one day, all humanity can do the same and have the possibility to connect to a brain to share their experiences and knowledge. Come on, the doctor dreams of creating the internet. But bonney is already tired of so much chatter and, suddenly, threatens to vegapunk with a lightsaber. She demands that he return his father to normal. Faced with such a difficult situation, the doctor advises bonney that that sword is defective and that it will attract insects. Said and done. A swarm of insects approaches bonney and it collapses.

Ok, yes, but what about the robot?

The doctor comments that he understands that bonney wants to kill him, although he quickly changes the conversation and asks luffy by Wano and if it is true that a second dragon appeared capable of facing kaido. luffy quickly realizes that he is talking about momonosuke. vegapunk then he tells him that the fruit that he left in punk hazardIt was actually defective. She also tells that the fruit was created over 20 years from the lineage factor of kaidoand that the process was also very expensive. luffy he hallucinates the doctor’s ability to create an artificial fruit.

He also tells the doctor how powerful the fruit turned out to be, momo He even managed to become the current protector of the island. However, when vegapunk learning that the dragon was pink, he reiterates that the fruit was definitely flawed. Scientific stuff, we suppose. But it’s time to talk about the really shocking thing again: what the hell is that robot? What are you doing there?

The doctor tells luffy and company that that robot attacked Mary Geoise 200 years ago. Obviously, everyone hallucinates. But nothing compared to how they do it when vegapunk specifies that actually was created 900 years ago. Luckily, he says, there were no victims, as the robot ran out of energy when it reached the city. He also tells that He still doesn’t know who created it or with what intentions. However, the government ordered its destruction, but the curiosity of the scientists prevented that from happening and there it is without the world government know nothing about it.

In the other room, we see how everyone is looking at the robot already luffy through a screen. vegapunk tells the other group Mugiwaraswhich at that time, apparently there was a mobilization for the discrimination of the Fishman, hinting that the robot could have something to do with it. It also presupposes that he himself crossed the Red Line. Account that the Vegaforce 01 It is a model made based on said robot, but it has not been able to replicate all its parts even with current technology.

vegapunk be honest with luffy and he confesses that he did a lot of damage to bonney. luffy he asserts and demands that he apologize. Immediately afterwards, the doctor tells him that he has something for Bonney, but that he also appreciates the chance that he appeared on the island that day, because he needs to ask him for a favor: help you get out of Egg head. It is a bit of a coincidence, really.

We now move abroad. there is the PC0 trying to get onto the island and surrounded by all sorts of robotic sea guards. Someone informs them that they have been seen bonney enter the island. lucci He comments that they are fed up with it escaping so much and that, if they see it, they will delete it. To the Mugiwaras They don’t like to discover that Rob Lucci is near. But things are going to get even more complicated, and that is Shaka orders that the PC0, let them leave the Seraphim and go. He’s going to stop the World Government from entering the island..

But there is still one last twist. Now we move to kamabakka kingdomwhere kuma (that we remember, he had been rescued by the Revolutionary Army) starts doing strange things. So much so, that despite not being recovered, He runs off in the direction of some place that the others do not know. In addition, it does it at a worse impossible moment, because apparently Dragon and company warn that the battle is just about to begin.

And up to here the chapter 1067 of the manga of one piece. And you, what do you think? For what and who invented that gigantic robot of the past? where is it headed kuma? Remember that, as always, you can tell us about your impressions and theories in our account Twitter.