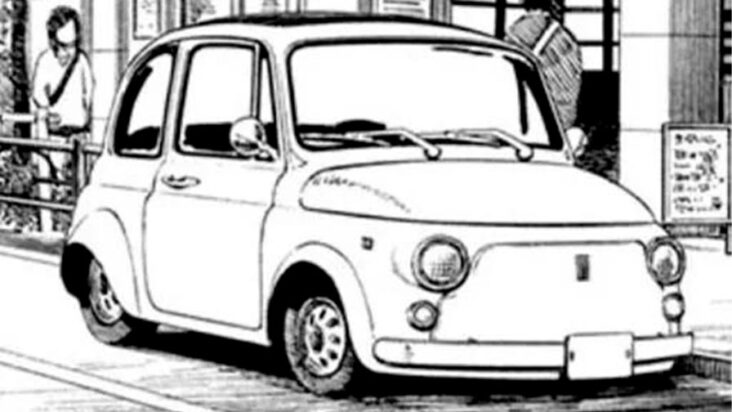 Welcome to Kobeni’s car, this is officially my first article, I hope you like it. I will go directly to the point, the Kobeni Car is very similar to the “Fiat 500” model or rather, it is equal to the Fiat 500, a car manufactured by the Italian company Fiat between 1957 and 1975. The Fiat 500 was launched at the sale in July 1957 and was promoted by the company as a very economical and practical car, that’s just what our girl Kobeni in Chainsaw Man needs.

I know that information is not enough, so I am attaching some images of the «Fiat 500» model, I specifically looked for that model in yellow, there are too many Fiats and you can get confused with the model, as a curious fact, when looking for images of the Fiat 500 in yellow, I was surprised not see it too much, that is, it seems that more models were made in blue.

You yourselves can compare the design of the real car with that of Kobeni, although there is no doubt that Tatsuki Fujimoto was inspired by that model. Tatsuki Fujimoto was inspired by thousands of things for the work of Chainsaw Man, if you want to discover more quality Chainsaw Man content you can continue with more of the articles on this website.

Friday is for friends. Have a great day everyone! ❤️🇪🇺🇮🇹 #FBPE

Look at that Tweet post, it seems that it is some kind of promotion of the Fiat 500, I don’t remember if it was officially like that but seeing the image with all those cars is what I think. Look at all those Kobeni getting out of the car, well I know they’re not Kobenis but you guys get my point, I’d like to see that color picture, what color do you think those cars are? I think they are blue based on the search I did, it doesn’t matter what color they are.

It is true that I am writing this before the anime adaptation comes out, so it may have a couple of changes with respect to the manga version, it should not be like that but we all assume that it is yellow just like the Fiat 500, it would be strange to see it of another color in the anime. It’s a scene that I personally look forward to very much and a scene that will really break the internet, I mean… it already did in the manga and ranked 15th in the second popularity poll, with 9,269 votes, it will definitely be crazy in the anime.

It is true that I am writing this before the anime adaptation by the MAPPA studio comes out, so it may have a couple of changes with respect to the manga version, which should not be the case, it would be quite strange to see it in another color in the anime, I’m sure it won’t be like that but it would still be strange, plus we’ve already seen the car in the Chainsaw Man character popularity polls.

The scene of Power driving the car is a scene that I personally look forward to a lot and a scene that will really break the internet, I mean… it already did in the manga and Kobeni’s car ranked 15th in the second popularity poll with 9,269 votes. , it will definitely be crazy in the anime. Everyone will be talking about Kobeni’s car.

There are many videos on YouTube of the Fiat 500 but few in yellow like Kobeni’s car, even so I made sure to leave you the best video so you can appreciate Kobeni’s car in real life, it’s a great video and I hope you enjoy it. I wonder how much money that car will cost after the anime adaptation, maybe it can double in value or something similar.

Everyone will want to have a Kobeni car, I want mine. I really want to have that collectible car, it’s so cute and we all know what Power did while he was driving. I’ll buy it when I have enough money and I’ll put it inside the house, maybe I’ll have my meals inside the car, I don’t know.

Thank you for reading What model is Kobeni’s car – What car does Kobeni drive, I hope you liked it, I really enjoyed writing this and looking for information about the car.